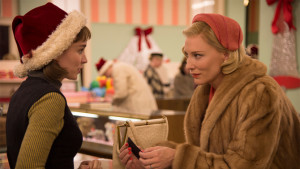 By now, you’re probably familiar with Todd Haynes’ Carol – a love story between two women in 1953 New York City. Before you jump to any conclusions (such as, “I’m not going to see any movie about homosexual love,” or “I can’t wait to see a movie about repressed homosexual love”), you should know that this is a very special, tender, and emotional film about universal love. That this love features two women is almost immaterial to the progression of their relationship. Yes, homosexuality was considered a sin 60 years ago (and was never discussed, much less embraced), but the relationship evolves steadily, as would any mutual attraction.

Carol stars Cate Blanchett as a middle-aged woman going through a divorce. She has an instant attraction to Therese, a department store clerk played by Rooney Mara. As Carol’s marriage proceeds to deteriorate, Therese rejects her boyfriend’s marriage proposal, as well as an advancement made by a friend who might be able to secure her a dream job. Therese doesn’t dislike either young man; but there’s something missing – a mutual attraction. In Carol’s case, neither she nor her husband Harge (played by Kyle Chandler) harbor an aversion to the other. Harge is simply upset that his wife has enjoyed at least one previous lesbian relationship. They both love their daughter. The various relationships in Carol fall within that glorious “shade of grey” which exists between the typical black and white platitudes Hollywood spoon-feeds us.

Unfortunately, just as Carol’s and Therese’s love deepens, Harge makes a push for sole custody of their daughter – effectively ending (or at least suspending) their affair. Again, this might be a desperate husband’s logical next move, no matter the gender of his wife’s new extra-marital partner. Unlike some recent pictures (Trumbo and Concussion come to mind), Carol’s characters don’t speak in annoying platitudes about the societal importance of their predicament. Instead, they happen to be two women who fall in love – unfortunately, in a time and place unreceptive to their passion for one another.

Carol is a quiet film, featuring occasional speechless sequences during which Edward Lachman’s exquisite cinematography marks the passage of time. Often, we see Carol’s and Therese’s love for one another articulated through facial expressions, rather than through a flourish of dialogue.

Cate Blanchett has secured another Best Actress nomination for the title role, and while she’s certainly very good as the disaffected middle-aged woman, I actually preferred her as the high-strung television producer in last fall’s Truth. The real star here is Rooney Mara as the shy but ardent young lady. This film actually should have been named Therese. It’s her story; she’s the star. So naturally, the academy has relegated Mara to the Supporting Actress category. But how different this character is from the hardened, eccentric computer whiz she played in 2011’s Girl With The Dragon Tattoo. She has transcended both roles, and deserves to win.

Carol is a deliberately-paced, yet supremely interesting, story of a love affair which grows as outside forces cause it to remain unfulfilled. Never once was I offended. It reminded me of Ira Sach’s appallingly underrated 2014 drama Love Is Strange, in which John Lithgow and Alfred Molina play a gay couple forced to conform to certain societal barometers. Both films are the current standard against which future same-sex love affair pictures will be measured.