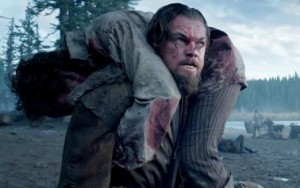 Webster’s defines a revenant as something that comes back, as a ghost or spirit. And that’s exactly what Leonardo DiCaprio does in Alejandro Inarritu’s new film, The Revenant. It’s also what Inarritu does to me, in a figurative sense. You see, I strongly believe Inarritu’s last picture, Birdman, was one of the worst films to ever win the Best Picture Oscar. And now he’s returned to haunt me with more of his mildly innovative yet completely annoying long tracking shots. Such cinematography seemed to serve no purpose in Birdman, and it doesn’t help here either. In one scene, it’s actually a poor directorial choice.

The Revenant stars Leonardo DiCaprio as fur trapper Hugh Glass, left for dead by his hunting party in 1823 Montana, who returns to seek revenge against the man who abandoned him in the harsh winter wilderness. The bad guy here is John Fitzgerald (played by Tom Hardy) who seems to hate Glass for no reason other than the requirements of the screenplay. Following a gory bear attack, Fitzgerald suggests killing Glass to put him out of his misery and to allow the hunting party to proceed more quickly. As Glass is the best trapper and scout of the group, leader Andrew Henry (Domhnall Gleeson) doesn’t want to lose him. Unfortunately, when Captain Henry decides to leave two boys and an adult behind to watch over the severely injured Glass, he makes the unforgivingly bad decision to make Fitzgerald the adult. Fitzgerald then proceeds to murder Glass’ half-breed son, Hawk (newcomer Forrest Goodluck), right in front of our wounded hero. Tired of waiting for the return of the rest of the group, Fitzgerald buries Glass alive, and swears the other boy to secrecy.

But since Glass is played by Leonardo DiCaprio (and since only Alfred Hitchcock was crafty enough to kill off his big star during the first act of a motion picture), he finds the inner strength to rise from the ground and nurse himself back to a condition in which he can track down Fitzgerald and seek his revenge. If this set-up sounds preposterous, it is actually based on the experiences of Hugh Glass, who was a real fur trader in the years following the Louisiana Purchase. Michael Punke’s 2002 book, “The Revenant: A Novel of Revenge” highlighted many of Glass’ experiences, and Inarritu and screenwriter Mark L. Smith have adapted parts of those stories for this motion picture.

Having made it through the sanguinary first act, I expected to be bored stiff by the middle portion of The Revenant, which focuses on Glass’ long solo journey. Instead, I found myself entertained for the first time in an Alejandro Inarritu film. Glass befriends another lone traveler, a Pawnee, he saves a Native American girl from a rape by French fur traders, and he flees an Arikara chief who mistakenly believes Glass has kidnapped his daughter. These adventures not only enliven what begins as a ludicrous story structure, but they successfully mark the long passage of time between the beginning and the end of the film.

As far as the camerawork is concerned, I still see no objective to Inarritu’s insistence on over-utilizing the long tracking shot technique, but his intermittent straight-up views of the top of the treeline appear to exist to symbolize the idea of a person rising from the dead. The place where the tracking-shot approach does not work is the much-hyped bear attack at the beginning of the film. Granted, the bear does look realistic, but the sense of imminent danger would have been heightened by a series of quick cuts among the bear, the victim’s facial reactions, and the attack itself. As I watched this sequence, I thought of how much more adeptly Martin Scorsese would have handled this material.

Furthermore, Inarritu insisted on using the natural lighting of their location filming in the Canadian wilderness. Much as with Stanley Kubrick’s Barry Lyndon, I’m not sure I see the point.

Much has been made of The Revenant finally earning Leonardo DiCaprio his overdue Best Actor Oscar. And he’s probably considered the front runner. But I have several problems with his winning this award. First, while he’s fine in the role, acknowledging his work feels like rewarding him for enduring the torture of playing the character. After all the blood and gore, being buried in dirt, filming in icy cold environments, sleeping inside the carcass of a dead horse, and eating things most of us wouldn’t touch, an Oscar would seem more a survival award. I felt the same way about Malcolm MacDowell in Stanley Kubrick’s A Clockwork Orange. His acting was great, but Kubrick put him through the proverbial ringer.

Second, DiCaprio should have won for The Wolf Of Wall Street in 2013, if not also for Revolutionary Road in 2008. I’ve never liked the idea of giving out Oscars to acknowledge a particular actor’s body of work. In my opinion, the award should go to the most deserving. This year, the most deserving is young Jacob Tremblay from Lenny Abrahamson’s Room. My fear is that, given the fact that Tremblay just turned nine years old, the academy will put him in the Supporting Actor category – even though he carries the entire film, and appears in every scene.

Did I like The Revenant? Not really. I made it all the way through. I survived, while turning my head away from the screen only a few times. But I’m not sure what I’m supposed to take away from this film. Watching it is a relatively unpleasant experience, and at almost three hours in length, I feel like it should have made some grander statement than simply introducing us to the brutality of a time and place foreign to most of us. It’s not a terrible picture. It’s better than Birdman. But if I were a voting member of the academy, I’d be inclined to vote for some far more deserving films this year.