Theatre on the Square Announces their 2015-16 season schedule. 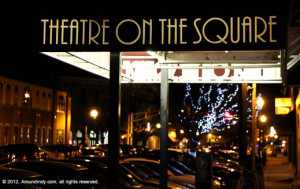 A musical about the ever-changing nature of romantic relationships in the first decade of the 21st century. Set in an international airport located in a large city somewhere in the mid-west, this production is a series of encounters—with dialogue and music—that take place between an assortment of couples and individuals at various locations—arrival and departure concourses, waiting lounges, baggage check, observation deck, and the central location, a bar—in the airport.

Brent Marty revives his one-man/one-woman musical comedy written and originally performed by Fred Barton. It is a loose parody of the character of Almira Gulch from the 1939 MGM film The Wizard of Oz as portrayed by Margaret Hamilton. Blurring the line between fiction and reality, the show builds on the premise that Almira Gulch was an actress—rather than a character portrayed by an actress—who appeared in The Wizard of Oz (as herself). Songs include Born On A Bike, Pour Me A Man, and I Can Be An Icon, Too

Naughty and Nice for the Holidays

The NICE: A Christmas Story
November 27 – December 20, 2015
On the Christel DeHaan Main Stage

Humorist Jean Shepherd’s beloved memoir of growing up in the Midwest in the 1940s.  The story follows 9-year-old Ralphie Parker in his quest to get a genuine Red Ryder BB gun under the tree for Christmas. All the elements from the beloved motion picture are here, including the family’s temperamental exploding furnace, the school bully, the boys’ experiment with a wet tongue on a cold lamppost,   Ralphie’s fantasy scenarios and more. A Christmas Story is destined to become a theatrical holiday favorite.

Eight reindeer dishing about the real Santa. All those rumors you’ve heard about him and the elves? About Rudolph’s little secret? About Vixen’s story that was leaked to the press? All true. Yes, the reindeer finally speak up and – believe us – they do not hold back!
Called “Refreshing, disturbing…and hilarious “ by The Naples Daily News.

Actor Bill Simmons stars in this play about family, secrets and relationships gone bad. Kyra is surprised to see the son of her former lover at her apartment in a London slum. He hopes she will reconcile with his distraught, now widowed, father. Tom, a restless, self-made restaurant and hotel tycoon, arrives later that evening, unaware of his son’s visit. Kyra, who was his invaluable business associate and a close family friend until his wife discovered their affair, has since found a vocation teaching underprivileged children. Is the gap between them unbridgeable, or can they resurrect their relationship?

The first play by the author of August: Osage County, which premiered at Chicago’s Steppenwolf before going on to acclaimed productions in London and New York. Hired by the dissolute Smith family to murder the matriarch for insurance money, Killer Joe takes the daughter to bed as a retainer against his final payoff which sets in motion a bloody aftermath as the “hit man” meets his match.  Wes Craven called it “White-trash Gothic with a comic-book spin.”

Set in 19th century Italy, this dramatic musical concerns a young soldier and the changes in him brought about by the obsessive love of Fosca, his Colonel’s homely, ailing cousin.  The New York Times said “Once in an extraordinary while, you sit in a theater and your body shivers with the sense and thrill of something so new, so unexpected, that it seems, for those fugitive moments, more like life than art. Passion is just plain wonderful.”

Batboy: The Musical
April 29–May 28, 2016
Theatre on the Square – Christel DeHaan Main Stage

Inspired by a series of tabloid headlines published in 1992 by The Weekly World News, a group of spelunking West Virginian teenagers discover the creature and the sheriff brings him to the local veterinarian (Dr. Parker’s) home, where he begins to assimilate to human life and become a part of the Parker family while trying to keep his penchant for sucking human blood under control. When Edgar tries to ingratiate himself with the townfolk of Hope Falls, he is quickly rejected, and he and Dr. Parker’s daughter (who fall in love) run away together. After a single night of joyous freedom, tragedy strikes when Meredith finds them and reveals the dark secret of Bat Boy’s origin.

The play focuses on Sarah and James, a photojournalist and a foreign correspondent trying to find happiness in a world that seems to have gone crazy. Theirs is a partnership based on telling the toughest stories, and together, making a difference. But when their own story takes a sudden turn, the adventurous couple confronts the prospect of a more conventional life.

20th anniversary of RENT on Broadway!  Set in the East Village of New York City, rent is about falling in love, finding your voice and living for today. Winner of the TONY Award for Best Musical and the Pulitzer Prize for Drama, rent has become a pop cultural phenomenon with songs that rock and a story that resonates with audiences of all ages. Based loosely on Puccini’s La Boheme.

Winner of the TONY Award for Best Musical and the Pulitzer Prize for Drama.