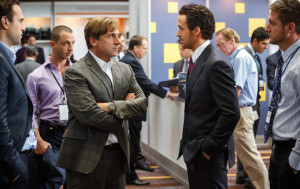 Director Adam McKay has finally made an “adult” film with The Big Short. Unfortunately, I can’t quite recommend it. If the name Adam McKay sounds familiar, he’s a former Saturday Night Live writer who directed the inane Will Ferrell comedies Talladega Nights and Anchorman. The Big Short is a big step up the ladder for McKay, and he’s tackled a difficult subject – the mortgage/banking crisis which led to the Great Recession in 2008. While it’s admittedly difficult to make these contents palatable to the vast majority of us, McKay gets an “A” for effort.

Christian Bale plays Dr. Michael Burry, a bizarre heavy-metal loving hedge fund manager who pores over housing market figures and determines the high-risk/low-reward loans of the early 2000s will lead to a financial collapse in 2007. Burry then bets against these loans, much to dismay of his customer base.

Meanwhile, Ryan Gosling is Jared Vennett, a Wall Street trader who picks up on Dr. Burry’s scheme, and tries to profit from it himself. Steve Carrell, of all actors, plays Mark Baum, another hedge fund manager, who joins forces with Vennett, and slowly uncovers the disgusting truth that the securities and banking industries are, in large part, corrupt. Much as with Tom McCarthy’s recent Spotlight (which made interesting – and even fascinating – the discovery process of the cover-up of the Catholic priest scandal), The Big Short excels when it unearths industry secrets. Carrell’s character is easily the most alluring in this film, and he turns in his best performance ever.

A third story involves John Magaro and Finn Wittrock as two young investors who also profit from the pending economic disaster – guided by a bearded, almost unrecognizable Brad Pitt as Ben Rickert, a retired banker hesitant to return to the cutthroat world of mortgage securities.

When the inevitable economic crash occurs, our protagonists (almost all of whom are based on real people) profit, even as they come to realize the depth of the horror and antipathy of their actions. The final scenes of the deaths of market giants Bear/Stearns, Lehman Brothers, Merrill Lynch, and Citigroup are riveting and disheartening.

What works in The Big Short? In short, Steve Carrell. His character is an uncaring, big-money jerk, who bullies his way into meetings to which he’s not invited, and won’t give underlings the time of day. Yet there’s a gripping side story about his brother who committed suicide. Following the financial collapse, Carrell’s character, much more so than any of the others, has a change of heart that is a delight to watch.

What doesn’t work? Two aspects of The Big Short bothered me. First, this is very serious subject matter, and McKay’s attempts to “lighten the load” seem out of place. I understand that Ryan Gosling’s character is the narrator, but he (and occasionally other characters) will speak directly to the audience in asides. This is a humorous technique in broad comedies like Airplane, but it seems out of place here. Likewise, when complex definitions of various banking terms must be explained, the narrator should perform this task. Instead, Gosling will say something like, “Now here’s Margot Robbie in a bubble bath to explain Collateralized Debt Obligations,” and sure enough, actress Margot Robbie then instantly appears, sitting in a bubble bath, to explain CDOs. I’m sure this approach sounded funny on paper; in practice, it not only upsets the flow of the movie, but it reduces the material to a joke. It isn’t. Investors lost their life savings during the financial collapse of 2007-2009, and their plight should be treated with a sense of reverence absent in The Big Short.

I also realize this substance is challenging to successfully present to most of us. However, I left The Big Short not knowing anymore about the banking crisis than I did before. I learned that Wall Street is greedy (something I learned in Oliver Stone’s superior 1987 film Wall Street), that nobody served jail time for their undervaluing mortgages (something I learned from watching the news), and that hedge fund managers continue to make bad loans without government regulation (something I suspected). Contrast these “revelations” to the enormous amount of material I learned watching Charles H. Ferguson’s great 2010 documentary Inside Job. That picture was an indictment of the corrupt American financial services industry, which explained, through charts and graphs, the reasons behind the economic collapse – and did so in a very conversational and thoughtful manner, respecting its audience while diluting the very specialized mechanics of the banking and securities industry.