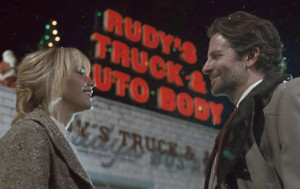 David O. Russell’s new film Joy is based on the story of Joy Mangano, a divorced mother from a broken home, who invented the self-wringing mop, becoming a shopping-network sensation and a self-made millionaire. Sound interesting? Didn’t think so. Don’t be fooled. This is one of the best pictures of the year.

Russell and his frequent star, Jennifer Lawrence, have a way of enlightening any material, and they’ve certainly done so here. By focusing on the odds against personal success of any kind, coupled with intelligence and raw determination, Joy (the film and the protagonist) manages to turn conventional wisdom on its head and to present us with a fascinating account of a personal struggle for both acceptance and triumph.

Coming off the success of his instant classic from 2013, American Hustle, director and writer David O. Russell shows us the natural acumen of our heroine during her elementary years – fueled by an equally ambitious and astute grandmother who never had the chance to rise to her potential because of the societal mores during the time in which she lived. Flash forward to Joy’s pre-prosperity life of disarray – caring for her two children, while her preposterously passive mother watches soap operas in her bedroom, her musician ex-husband lives rent-free in the basement, and her ailing grandmother acts as the guiding hand to this anarchic reality. Into this disorder walks Joy’s father Rudy, played by another Russell regular, Robert DeNiro. Long divorced from her mother, and now divorced a second time, Rudy still harbors ill feelings toward Joy’s mother and to Joy’s lazy husband. Unfortunately, Rudy must now share the basement with the ex, Tony Miranda, a Tom Jones wannabe played by Edgar Ramirez. Thanks to Joy’s intellect and determination, she manages to hold all the pieces of this life together.

It is during these scenes, we learn the backstory of the intervening years – the quick courtship and equally quick marriage of Joy and Tony, the abhorrent behavior of Rudy, and the incident which caused Joy to invent the “mop which saved our story” – from both caricature and from boredom. When Joy enlists her erratic family members to guide her through the procurement of raw materials, labor, accounting, and marketing, things actually begin to look promising. It’s as though the family needed a common goal in order to function coherently. A failure to effectively market the mop through retail avenues results in a longshot meeting with QVC Network executive Neil Walker, played by yet another Russell favorite, Bradley Cooper. Walker gives Joy more than her fair share of opportunities to market the mop, eventually resulting in a national phenomenon – in part because Joy insists on selling the mop herself on QVC, rather than via actors or trained professional television pitchmen. Her everywoman persona clicks with American viewers in a way not even QVC brass could foresee.

Much as in American Hustle, the final act brings Joy her worst defeat, but also her greatest triumph. The ending is pure magic, and the denouement gives us just enough of a glimpse into the future to send us away happy and proud – of smarts, hard work, and the opportunity provided by the “Great American Dream.” There are still good stories to be told, and this is one of them.

As Joy, Jennifer Lawrence is pure gold. Remember she already won a Best Actress Oscar for her delightful performance in Russell’s 2012 offering Silver Linings Playbook. Had it not been for Lupita Nyong’o in 12 Years A Slave, she likely would have won Best Supporting Actress the following year for her achievement in American Hustle. This year, she could very well win Best Actress again! Her primary competition will come from Brie Larson’s magnificent turn in Lenny Abrahamson’s Room. As usual, Lawrence brings just the right nuance and panache to the lead role. We believe Joy was her high school valedictorian (she was), yet we also believe her life could have dissolved into a scarcely manageable chaos (it did). Lawrence circumscribes this dichotomy into an appealing Jane Doe that could be the future CEO of a major corporation and our next-door neighbor, all rolled into one.

The supporting cast is also strong, particularly Ramirez as the supportive, albeit directionless, ex-husband-yet-still-best-friend, and Diane Ladd as the inspirational grandmother. Bradley Cooper is a little too intense as the QVC exec, and Virginia Madsen’s role as the apathetic mother is comical if downright hard to fathom role. But DeNiro, of all actors, seems to be acting in a different movie. The broad comedy of his acerbic wedding toast feels like something out of an Adam Sandler film. The problem isn’t necessarily DeNiro; the screenplay should have taken one more pass through the editing mill to soften his character’s edges.

As far as David O. Russell is concerned, Joy is another splendid accomplishment by a man rapidly turning into one of our best directors. American Hustle ranks as one of my five favorite pictures so far in the teens – and probably one of my ten best so far this millennium. I didn’t expect Joy to top it, but the fact that it comes a lot closer than I expected is a testament to Russell – as both a writer and director. Beside Lawrence and Cooper, American Hustle also starred Christian Bale and the great Amy Adams. I missed them here. I’d love to see the foursome of Lawrence, Cooper, Bale, and Adams together for Russell’s next outing. But Joy is truly a Jennifer Lawrence vehicle. If she either (a) isn’t one of your favorite actresses now, or (b) isn’t even on your radar, she will be now. Joy is a joy, and I can’t wait to see it again.

Andy Ray film reviews also appear on the website TheFilmYap.com, where he also serves as film historian for the website.