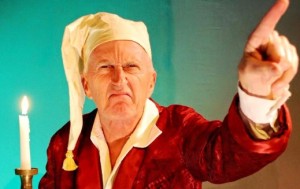 Buck Creek Players invite you to celebrate the holidays with a charming musical production of the classic Dickens tale.  Miserly Ebenezer Scrooge’s “Bah! Humbug!” opinion of Christmas grates on everyone around him. But when Scrooge is visited by the ghost of his former partner and three Christmas spirits, he gets a second shot at life — just in time for Christmas Day!

The musical adaptation is based on the 1971 film starring Albert Finney and this Yuletide treat is family friendly. Like the film, the musical closely follows the plot of Charles Dickens’ A Christmas Carol, in which the miserly Ebenezer Scrooge undergoes a profound experience of redemption over the course of a Christmas Eve night. Its score and book are closely adapted from the music and screenplay of the 1970 musical film.

Composer Leslie Bricusse was nominated for an Academy Award for the song score he wrote for the film, and most of those songs were carried over to the musical.