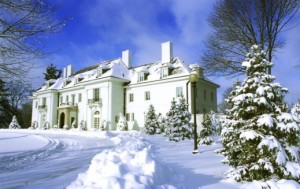 Christmas at Lilly House sees the transformation of Oldfields with holiday decorative ideas that were current during the 1930s and 1940s. These bygone days reflect Depression-era frugality and wartime shortages – conditions that influenced Americans’ approach to decorating their homes. The type of decorations you will see may not be what you expect. The Indianapolis Museum of Art states “although commercialism and mass-produced decorations were certainly part of the scene at this time, most American homes were not as lavishly decorated as they would become later in the century, and older traditions of using natural materials and blooming plants still held strong. Greenery cut and shipped from southern woodlands, such as palms and magnolia, augmented local materials and greenhouse-grown flowers to provide a wide variety of decorative choices.”

Christmas at the Lilly House
Indianapolis Museum of Art

Décor in the house will include a combination of familiar favorites such as trees, wreaths, and greenery, as well as more unusual elements sure to delight visitors. Whether originating in an atmosphere of wartime scarcity or in times of peace and plenty, holiday décor expressed Americans’ wish for a sense of connection with tradition and for festive seasonal changes.

USA Today voted Christmas at Lilly House one of the top Indianapolis Holiday Attractions. Docent-led tours of the Lilly House, with special anecdotes about the holiday season are available.