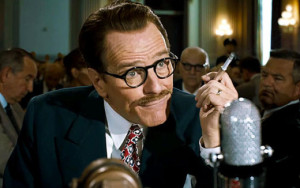 As you’ll learn in Jay Roach’s new biographical film Trumbo, Dalton Trumbo was a successful Hollywood screenwriter in the 1940s. Count Thirty Seconds Over Tokyo and the Ginger Rogers vehicle Kitty Foyle among his hits. Dalton Trumbo also happened to be a member of the Communist Party of America. After the end of World War II, the Nazi threat in the United States was replaced, if you will, by the threat of communism. Some Americans equated communism with the ruthless Soviet regime of Josef Stalin. In 1947, the House Un-American Activities Committee held hearings on supposed communist propaganda infiltrating the motion picture industry. Dalton Trumbo was forced to testify before the committee on his personal involvement in communism and on his knowledge of other communists in Hollywood.

Dalton Trumbo was an eccentric man. He was a prolific writer, sometimes churning out several screenplays in one week. He composed his scripts in the bathtub, on a manual typewriter, while drinking whiskey and chain-smoking. During these times, he required his ever-supportive family to leave him alone – even at the expense of his involvement in the lives of his children. Trumbo was smart, witty, and occasionally mean. He was well-known in Hollywood circles, and proudly wore his communism on his sleeve.

As you might imagine, Dalton Trumbo refused to answer the ridiculous questions posed by congressmen, instead verbally turning the tables on what he considered to be a sickening display of anti-American pompousness – designed merely to win favor with paranoid voters back home. Trumbo was blacklisted, and was then unable to find work unless he wrote using pseudonyms – so moviegoers would have no idea he was attached to the pictures they were enjoying. Because Trumbo was so good at his craft, his services were still in high demand, although the major studios refused to employ him – even as a ghost writer.

Enter Frank King of the low-budget King Pictures – played by the affable and amusing John Goodman. King Pictures produced low-budget shlock, and Frank King’s operation was so seat-of-the-pants, he was courageous enough to hire Trumbo. Before long, Trumbo was conceiving scripts for larger-scale productions. Ghost-writing for Ian McLelland Hunter, Trumbo won a Best Screenplay Oscar for the 1953 production Roman Holiday – the film that made Audrey Hepburn a star. Unfortunately, his blacklisting rendered him unable to accept the award. The 1956 film The Brave One earned Trumbo another Best Screenplay Oscar – this time using the pseudonym Robert Rich. When Rich’s name was called, nobody was available to accept the award. Nobody knew who Rich was.

By 1960, the communist threat had simmered a bit, and the Hollywood blacklist had abated enough that certain Hollywood bigwigs were ready to take a chance on attaching Dalton Trumbo’s name to their work. Among them were actor Kirk Douglas, who produced and starred in the historic drama Spartacus, and Otto Preminger, who directed the biblical epic Exodus. Roach’s Trumbo concludes as President John Kennedy crosses picket lines to see Spartacus.

As Dalton Trumbo, veteran character actor Bryan Cranston turns in his best performance ever as the ever-mugging ever-prickly writer. Diane Lane is wonderful in the surprisingly fleshed-out role of Trumbo’s wife Cleo. But the best supporting achievement belongs to Louis C.K. as fellow communist screenwriter Arlen Hird – a man who, like Trumbo, was jailed for refusing to name names before the House Un-American Activities Committee. But unlike Trumbo, Hird refused to ghost-write to earn a living following his release from prison. Louis C.K. does an excellent job of showing us the cognitive dissonance of Hird’s beliefs versus his career.

As actor Edward G. Robinson, Michael Stuhlbarg (from Steve Jobs) looks enough like Robinson to be believable. Unfortunately, while he sounds exactly like John Wayne, David James Elliott looks nothing like him. And Dean O’Gorman is so bad as the young Kirk Douglas, I didn’t know whether I was watching an impersonation or a caricature.

Furthermore, I was upset that writer John McNamara didn’t drive home the point that the so-called Hollywood Ten were blacklisted by Hollywood – not by the House Un-American Activities Committee. The committee had no authority to do anything – other than to expose communist “infiltration” in Hollywood. It was the studio executives who blacklisted writers like Dalton Trumbo and Arlen Hird, as well as actor-directors Orson Welles, Charlie Chaplin, and others.

I realize the committee members (along with Senator Joe McCarthy) are the obvious “bad guys” here, but Trumbo could have been more accurate in shifting a certain amount of the blame to the “Hollywood system” itself. By the late 1960s, the studios had much less control over individual careers, and such a boycott would have been impossible. I believe this point should have been driven home by director Roach and screenwriter McNamara.

A few weeks ago, I lamented that there had never been a major motion picture about the women’s suffrage movement (until 2015’s Suffragette). By contrast, there have been almost too many pictures about the communist scandals of the 1940s and ‘50s. While I certainly admired much about Trumbo, there were too many scenes of platitudinal speechifying by Trumbo, and too much an us-vs.-them mentality permeating many scenes. Life is not all black and white, even during an episode as embarrassing as the Hollywood communist scandal of the mid-twentieth century. For a superior picture, see George Clooney’s 2005 film Good Night And Good Luck – a drama depicting television journalist Edward R. Murrow’s expose against Senator Joe McCarthy’s communist witch hunts of the 1950s.