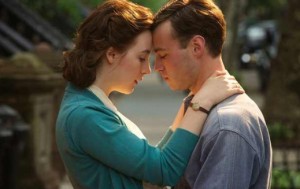 Every few years, a motion picture comes along that is so innocent and sweet it’s an absolute joy to watch. This year, that film is John Crowley’s Brooklyn. It’s a fresh, warmhearted, coming-of-age story of an Irish girl making a new life for herself in 1950s New York.

Irish actress Saoirse Ronan plays Eilis Lacey, who moves to New York at the invitation of a visiting Irish-born priest (another excellent turn by British character actor Jim Broadbent) who has found work for her in a Brooklyn department store. Eilis finds accommodations in an Irish boarding house run by a traditional Irish Catholic landlord, played by the great Julie Walters. At first Eilis is very homesick, and, as a naturally shy young lady, doesn’t make friends easily. Things change when she meets Tony Fiorello (Emory Cohen), a native New Yorker of Italian descent, who is instantly smitten with her.

After Eilis and Tony fall in love, she hurries back to Ireland to comfort her mother following a family tragedy. Torn between the comfort and familiarity of her homeland versus her new and exciting life in America, Eilis is forced to make some decisions about her love life, her future, and her home. Brooklyn is, at its heart, a film about home. Can our definition of “home” change one or more times during the course of a lifetime? Can individuals possess two homes simultaneously?

Saoirse Ronan is absolutely perfect as Eilis, mating wide-eyed innocence with a streak of independence we see unfold before us during Brooklyn’s two-hour running time. She should be nominated for a Best Actress Oscar, and stands a great chance of winning it. Ronan carries this film from the beginning, and in the last scene, imparts her knowledge to another young lass heading off to a new life in Brooklyn’s Irish community. It’s an effective way to validate our protagonist’s growth without appearing to function as a plot summary.

Brooklyn contains just enough humor to lighten what could have been a real tearjerker. Eilis’ dinner scenes at the Irish boarding house are particularly entertaining, and director Crowley does a first-rate job of introducing us to the half-dozen other girls, with their varying personalities and interests, in a short period of time. By the time Eilis meets Tony, we feel like her landlady and female residents are her family. Julie Walters turns in her best work in years, as the God-fearing antediluvian mother-figure to her charges. She doesn’t simply run a bed and breakfast; she considers the young women her girls – much like a sorority housemother. And some of their dinner discussions are classic. Credit screenwriter Nick Hornby, who adapted the script from Irish author Colm Toibin’s 2009 novel.

Also amusing is Tony’s eight-year-old brother Frankie, played by James DiGiacomo – the smartest of Tony’s brothers (at least in terms of schoolwork), and a real scene-stealer. Tony warns Eilis his youngest brother is “eight going on eighteen,” and he’s right.

Fortunately, and I mean this in the strongest sense of the word, Brooklyn is a picture about an outsider adapting to America, without seeming like an American film. In other words, Crowley and Hornby allow the romance between Eilis and Tony to develop at a deliberate pace. These two don’t jump into bed immediately the way they would in a Hollywood production; heck, Eilis doesn’t even allow Tony to kiss her on their first date. And he still wants to go out with her again – just like in real life! Furthermore, there’s hardly any bad language. And Eilis’ department store boss is demanding yet nurturing. In a traditional Hollywood production, she’d have to be one or the other.

Moreover, Brooklyn is devoid of that sense of societal sarcasm so prevalent in today’s mainstream fair. Director John Crowley presents a comparatively innocuous time and place, and shows it to us through the virtuous eyes of an immigrant. Brooklyn ranks with Lenny Abrahamson’s Room as one of the best motion pictures I’ve seen this year. I’m confident this moving, bighearted production will be remembered at Oscar time. It’s that good.