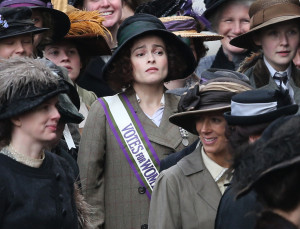 With all the motion pictures about the civil rights movement and the gay rights movement, I’ve often wondered why we’ve never seen a film about the women’s rights movement. I was excited to see Sarah Gavron’s Suffragette for exactly this reason; unfortunately, it left me underwhelmed.

Suffragette follows the fictitious story of Maud Watts (Carey Mulligan), played against the backdrop of the British suffragette movement of a hundred years ago. Maud and her husband Sonny (Ben Whishaw) are dirt poor. They both work long backbreaking hours at a local laundry, run by a tyrant (Samuel West) who isn’t above an occasional tryst with his female employees. But as his employees (particularly the women) have no rights, there is nothing any of them can do about it. Low pay; no rights; no union; subservient to men. This is Maud’s world.

Now Maud herself isn’t a suffragette, but some of her friends are, including her doctor’s wife (Helena Bonham-Carter), and her co-worker Violet (Anne-Marie Duff). They invite her to their secret meetings, and next thing you know, Maud is testifying before Parliament, throwing rocks through windows, and serving time in prison along with the rest of them. Meryl Streep is wasted in a three-minute cameo as Emmeline Pankhurst, the leader of the suffragette movement. Any British character actress could have played this role as well as Streep.

Eventually, Maud’s husband Sonny (Ben Whishaw) throws her out of the house and, finding himself subjugated by raising their son alone, puts the boy up for adoption. Undeterred by this somewhat radical stunt, Maud pushes onward in her quest to gain women the right to vote. I found Maud’s abandonment of her son to be unrealistic at best, and horrifying at worst – particularly from someone who loves her son so much she comes to see him at school every day, after Sonny evicts her. What possible social cause trumps raising your own son?

But Maud doesn’t seem to be a woman of deep convictions. She comes into the suffragette movement accidentally, then stays in the operation when her husband strikes back. As a protagonist, she reminds me of Ryan O’Neal’s title character in Stanley Kubrick’s Barry Lyndon, in that things happen to her, but she rarely initiates any activity on her own. Maud is like a pinball bouncing back and forth, constantly changing direction without putting up any resistance.

Because of this decision, I found Maud’s character to be improbable, and a poor choice to guide us through the intricacies of the suffragette movement. Wouldn’t it have made more sense for Gavron and writer Abi Morgan to have invented a convicted, highly spirited protagonist?

I was impressed, however, with the reactions of those outside the movement, particularly the women. While it seems logical none of the men supported the cause (which also included equal pay for women), most of the women did not either. They simply accepted their historic place in society, and had no intention or desire to rock the proverbial boat. I imagine this to be an accurate depiction, as social change requires time.

As I contemplated Suffragette, I couldn’t help but compare this movement with that of American civil rights. Dr. Martin Luther King preached a strategy of non-violence, which proved to be an approach with staying power. Nightly images of peaceful protesters beaten by authorities were beamed into our homes, multiplying the number of supporters exponentially. Now granted, television did not exist in 1912, but the suffragette movement was one predicated on violence. These women destroyed property and created havoc to advance their cause, rendering the entire revolution less tolerable to the masses than that of American civil rights. No wonder there hasn’t been a film about suffragettes before. If there is another, I hope it’s superior to Suffragette.