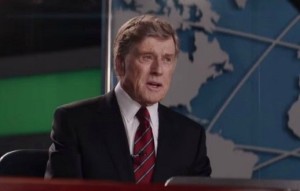 James Vanderbilt’s directorial debut is Truth, based on former CBS News producer Mary Mapes’ memoir of her last days at CBS. Truth chronicles the scandal that forced the resignation of longtime anchor Dan Rather, and the firing of Mapes. For those who may have forgotten, on “60 Minutes” Dan Rather ran a story presenting evidence that then-president George W. Bush had not only used his family connections to serve in the Texas Air National Guard rather than in combat in Viet Nam, but that he had failed to meet even the minimum performance requirements during his guard service. In fact, he didn’t even show up for duty for over a year. CBS had located documents showing that Bush was given preferential treatment, which was the basis for the “60 Minutes” story.

Unfortunately for Mapes and Rather, the authenticity of the documents was called into question the night the story ran. Bloggers noted the documents appeared to have been written on a word processor as opposed to a 1972 typewriter. Once Fox News and talk radio latched onto the “forged documents” concept, CBS became the story rather than President Bush. The resulting investigation culminated in the downfall of the onetime leader in network news investigation. The point of Truth is that the focus was taken off the story itself and onto the newsmakers – a result of today’s fractured audience, comprised of news consumers who intentionally receive their news from sources that present it from a political angle with which they agree, such as Fox News or MSNBC. We could call the CBS scandal the final nail in the coffin of our once independent news media, guaranteed in the First Amendment to the Constitution. Today’s television networks and newspapers are owned by large corporations which cannot help but influence the presentation of the news. The days of Edward R. Murrow and Woodward & Bernstein are long gone.

In one of the greatest ironic twists in recent film history, Dan Rather is played by Robert Redford – an actor who looks less like Rather than almost any other in the business. Remember that Redford played Washington Post investigative journalist Bob Woodward in the 1976 classic All The President’s Men, which documented how the Post brought down the Nixon Administration. That excellent film showed us the enormous potential of a free and independent media. Truth shows us how far we’ve come from free and independent.

Today’s audiences are taught to question everything, including sources and their authenticity, even if the story is true. It’s an interesting picture, but as a former broadcaster, I also found it very sad. To see respected journalists such as Mary Mapes and Dan Rather forced to justify every nitpicky choice is enough to drive anyone away from a career in investigative journalism. To be fair, Mapes and her staff were forced to rush the “60 Minutes” story on the air when a deadline was moved up. Not all their sources had been verified. They should have performed their work to a higher standard. Lost in the shuffle, however, was the fact that their story was true.

Mary Mapes is played by Cate Blanchett, who won a Best Actress Oscar in 2013 for her performance in Woody Allen’s Blue Jasmine. This goes down in history as one of the worst Oscar decisions ever. Not only did Amy Adams deserve the Oscar for her work in David O. Russell’s far superior picture American Hustle, but Adams’ performance was the best of any actor or actress in any film that year. Yet she somehow lost to Cate Blanchett. This time however, Blanchett does give an Oscar-worthy performance. Her Mary Mapes is the real star of the show – not Dan Rather. And Blanchett personifies the tirelessly hardworking news producer’s vigor during the first half of the film, followed by her long slide into self-doubt during the second half. This is the best acting of Blanchett’s career.

While most of the big-name supporting cast is wasted in small roles, I want to draw attention to character actor John Benjamin Hickey, who plays Mapes’ husband. At first, I assumed his character would be the typical supportive-spouse type we so often see. But he becomes a figurative rudder in Mapes’ life, steering her through the abyss of her downfall and the loss of her once promising career. I hope the academy remembers Hickey come Oscar time, but I fear his lack of name recognition will hurt his chances.

Truth is a good movie – not great, but very watchable. It succeeds by making us painfully aware of the sorry state of news journalism today. I believe it would work well as a companion piece to All The President’s Men. Watch Truth first, then in All The President’s Men, you’ll see investigative news when it was at its peak effectiveness. The two films will make you a little sad at how far we’ve sunk, but your eyes will be opened to the possibility that perhaps in the future news journalism will once again share at seat at the table of American democracy.