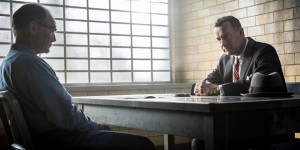 Steven Spielberg has a knack for finding stories of hope amidst backdrops of great tragedy. To wit, Oskar Schindler saved as many Jews as he could during the horror of the holocaust. Saving Private Ryan told the story of a U.S. Army Ranger who sacrificed his life to save the life of a paratrooper trapped behind enemy lines. Now, in Bridge Of Spies, he introduces us to insurance lawyer James Donovan, who orchestrated the release of downed U2 spy plane pilot Francis Gary Powers at the height of cold war tension between the United States and the Soviet Union.

Bridge Of Spies is a dark, drab, deliberately-paced history lesson, which happens to be the most interesting non-documentary American film I’ve seen so far this year. Tom Hanks (who also worked with Spielberg in Saving Private Ryan) plays Donovan, thrust into the national spotlight when he’s chosen to defend captured Soviet spy Rudolf Abel (British stage actor and playwright Mark Rylance). The U.S. wants to give Abel a fair trial to keep the Soviets from using his capture for propaganda purposes. When Abel inevitably loses, he is sentenced to life in prison rather than death, with the thought that he may be useful in bargaining with the Soviets. As luck would have it, Powers’ plane is shot down over the Soviet Union at about the same time. The USSR requests a prisoner exchange, and Donovan (as Abel’s U.S. attorney) coordinates the exchange.

As is typical, Spielberg’s story enlightens us with elements not widely known. Here, Donovan insists the Soviets also release an American graduate student who just so happened to be on the wrong side of the Berlin Wall during its overnight construction through Berlin. At first, the Soviets balk, but Donovan insists. As in Schindler’s List, Donovan is the righteous beacon of light amid the deepest tension of the cold war.

As you might expect, Hanks is solid in his role – conscientious without overdoing the sentimentality. In a wise move, Spielberg doesn’t give us too many scenes of Donovan with his family. While the “Powers for Abel” story is obviously big news in America, we aren’t subjected to scenes of the Donovan children badgered by classmates for having a “communist sympathizer” father.

Rylance is excellent as the Soviet spy. He understands the need for a fair trial, yet he doesn’t want to spill espionage secrets to Donovan or to any American. He walks a fine line here, and is splendid in the role of the conflicted prisoner. Is he worthy of a Best Supporting Actor nomination? I think so. It wouldn’t surprise me at all to see Mark Rylance’s name amongst this year’s nominees.

In the most poignant scene of the film, Donovan (having returned from Berlin) watches neighborhood youths scaling a fence separating two suburban lawns. He remembers watching a similar clamber in Berlin, as a group of East Berliners were killed attempting to scale the Berlin Wall. Smartly, Spielberg doesn’t give us a flashback as Donovan watches the neighborhood kids, but the contrast of the two boundaries (one free, one not) is unambiguous.