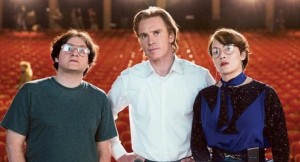 We all complain about television news. It’s too focused on the tragedies of everyday life and not enough on the so-called “good news” stories. In a way, that’s how I feel about Danny Boyle’s new film, Steve Jobs. While obviously a brilliant businessman and a pioneer in the personal computer industry, Steve Jobs was an arrogant jerk. I would rather have seen a biography of Bill Gates or Warren Buffett – billionaires who have used their wealth toward charitable causes – than Steve Jobs. However, Jobs is the subject of Boyle’s latest picture, so let’s begin.

Steve Jobs focuses on the mayhem leading up to the launches of three products – the 1984 release of Apple’s Macintosh 128K, the 1988 release of the NeXT, and the 1998 release of Apple’s iMac. All the action takes place in just the half-hour time periods before each of these corporate introductions. This gives Steve Jobs a frantic, rushed pace – mirroring the pace of Jobs’ hurried lifestyle. The backstage havoc reminded me of Robert Altman’s 2006 comedy, A Prairie Home Companion. By the time the show went live, viewers were out of breath. Same here. By the time Jobs takes the stage (in each instance), we feel like we’ve been through the proverbial ringer. Eventually, I grew tired of loquacious scenes of Jobs racing down a corridor, trailed by a colleague or two, each having his or her own vitally important conversation with the self-made entrepreneur. Fortunately, Steve Jobs has one very interesting sub-plot involving a daughter he refuses to admit is his.

Jobs is played to the hilt by Michael Fassbender, who was so great as the cruel plantation owner in 12 Years A Slave. Nobody plays a better villain these days, and Fassbender even looks like Steve Jobs. Seth Rogen plays Jobs’ original Apple partner, Steve Wozniak, and Jeff Daniels is Apple CEO John Sculley. Daniels plays a similar role as the head of NASA in The Martian, but his character here is more fleshed out. Jobs and Sculley have a long history, and their backstory necessitates flashback form to tell this part of Jobs’ life.

Now here’s a casting question: Whom would you select to play the role of Jobs’ longtime personal secretary, friend, and confidant – a woman of tireless energy, and superb organizational skills? Probably not Kate Winslet, who typically excels playing vulnerable and dependent women. But that’s exactly the actress Danny Boyle has chosen to play Jobs’ girl Friday, and she is excellent. She’s painfully aware of Jobs’ temper, sarcastic nature, and his ceaseless desire to always be right. And her approach to dealing with this psychopath is measured yet firm. She’s basically his mother. Next to her remarkable turn in Revolutionary Road, this may be the best job of acting she’s ever done. She may very well be nominated for Best Supporting Actress, although she actually belongs in the lead actress category.

Again, I found the truly intriguing story in all this madness to be that of Jobs’ daughter Lisa. During each time period covered in the film, Jobs’ ex-girlfriend (Katherine Waterston) shows up asking for money – for Lisa’s schooling, her braces, and so forth. Since Jobs refuses to acknowledge his paternity (based on a mathematical formula, of all things), he’s reluctant to spend any of his fortune to bring Lisa and her mother out of abject poverty. In fact, his primary use for Lisa is to try out his latest computers. While Jobs is aloof toward her, many of the Apple staff members develop relationships with the little girl who comes to visit her “dad.”

During the final segment, Lisa is played by Perla Haney-Jardine, the little girl in Quentin Tarantino’s Kill Bill saga. Haney-Jardine practically steals the show as teenage Lisa, who forces Jobs to come to terms with his parentage and reconcile with her. I contrast Haney-Jardine’s pubescent yet deliberate performance with the over-the-top work of Emma Stone as Michael Keaton’s impetuous daughter in last year’s Birdman. If Stone could be nominated for Best Supporting Actress (She was), certainly Haney-Jardine deserves such a nod this year.

The final sequence between Steve Jobs and Lisa is so moving it made me forget that I was bored for the first hour. Steve Jobs is the type of film in which viewers will need to engage early on, even if the subject matter might not be of interest. Given my reluctance to acknowledge motion picture perfection here, I was pleasantly surprised as the film progressed. This is a good picture; not a great one. But it’s probably one which will grow on me with repeated viewings.