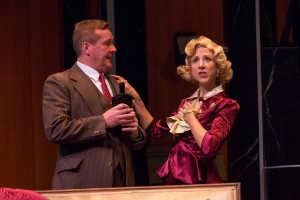 Set in December 1936, Broadway star William Gillette, admired the world over for his leading role in the play Sherlock Holmes, has invited his fellow cast-members to his Connecticut castle for a weekend of revelry.  When one of the guests is stabbed to death, the festivities in this isolated house of tricks and mirrors quickly turn dangerous.

October 23-November 7, 2015
Tarkington Theater at The Center for the Performing Arts

As the polt thickens, it’s up to Gillette himself, as he assumes the persona of his beloved Holmes, to track down the killer before the next victim appears. This Ken Ludwig farce was called “Murderously funny!” -Broadway World Cleveland

Jean Childers Arnold and Bill Book are back together on stage (remember Moon Over Buffalo last season?) with great comic timing and chemistry paced for maximum laughs.