Bobby Fischer was an American chess whiz who famously played Russian champion Boris Spassky in 1972, and beat him. Against the backdrop of the Viet Nam War and the resultant disillusion with the American political system, 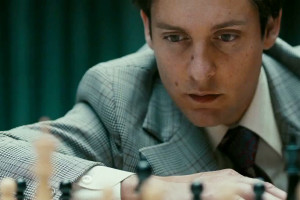 Fischer’s unlikely victory united our country, if only for a couple weeks. Chess, of all competitions, gave Americans something to cheer about and someone to rally behind. The Fischer/Spassky match, and Fischer’s life leading up to the match, is the subject of Edward Zwick’s new film, Pawn Sacrifice.

Steven Knight’s screenplay traces Fischer’s backstory to his New York City youth, during which young Bobby Fischer uses chess as an escape from his disheveled life with his mother, a communist sympathizer and radical, prone to holding “revolution” meetings in their small apartment. Chess provides Bobby with his only logical framework; it’s the only thing that makes sense to him. Soon, the prodigy is defeating seasoned American chess masters, and he decides to forego traditional education for a chance to do battle with Russian masters, considered the best chess players in the world.

But Bobby suffers from an increasingly extreme case of paranoia, particularly against the Soviet Union and its chess champs. Perhaps as a backlash against his communist mother, Bobby embraces the perception that all communists are evil, and therefore, the Russians surely must wiretap his phones, and bug his hotel rooms. As an outgrowth of this psychological condition, Bobby makes ever more ludicrous demands of his handlers – very specific hotel accommodations, and nearly impossible chess match requirements. Bobby’s is a brain wired so differently from ours, it’s difficult to imagine what thought processes he experiences. In this sense, Pawn Sacrifice reminded me somewhat of Ron Howard’s superior 2001 film A Beautiful Mind.

Tobey Maguire gives the best performance of his career as the conflicted Bobby Fischer. The strong supporting cast includes Liev Schreiber as Spassky, Lily Rabe as Bobby’s sister, Joan, and Peter Sarsgaard as William Lombardy, a Catholic priest and chess expert Bobby asks to mentor him and guide him through his chess career. Fischer actually needed a psychiatrist rather than a man of the cloth, but he would never admit he had a problem. William is far more important to Bobby as a chess friend than as a priest. In fact, when Bobby’s nerves need to be calmed and his brain rested, William engages Bobby in mental, spoken chess matches – in other words, not played on a board, but out loud, as in “Rook to queen three.” Yes, frustrating as this would be for the rest of us, this is calming for Bobby Fischer.

Particularly strong is Michael Stuhlbarg as Paul Marshall, an attorney who works pro bono for Bobby, organizing his matches, accommodations, and his career. He’s more than just a lackey; he represents Bobby’s voice of conscience. Think of him as Bobby’s Jiminy Cricket. Stuhlbarg doesn’t play Paul as the stereotyped nervous, excited Jewish character, but rather as a concerned friend and confidant. Without Paul and William, Bobby could not have handled the fortune and fame. Much of their time is spent ensuring Bobby doesn’t embarrass himself and his country.

My chief complaint with Pawn Sacrifice is in its structure. The most interesting years in Bobby Fischer’s life were those following the famous 1972 match – the years in which his paranoia caused him to become a veritable recluse, his 1992 rematch against Spassky, and the revocation of his passport by the American government when Fischer was overseas. Instead of concentrating on these years, Knight’s screenplay takes us only to the 1972 match, treating it as the final “big game” of the standard sports movie. Unfortunately, chess is uninteresting to watch, and we’re left wanting more – more story, more fleshing out of peripheral characters, more anything.

Director Zwick does a good job of letting us know how each match is progressing by the facial expressions and bodily movements of the participants – without attempting to teach us the complex game of chess. But it’s still not exciting. It’s just chess. Zwick’s sense of time and place is more than adequate; the archival footage, music, and interior decoration truly feels like 1972. But I already know how that match turned out. I wanted to know more about Bobby Fischer. What made him tick? What made him paranoid? Pawn Sacrifice left me empty.

For a better motion picture about the game of chess, see Steve Zaillian’s 1993 film Searching for Bobby Fischer, about the young life of child chess prodigy Joshua Waitzkin. It has nothing to do with Bobby Fischer (other than Fischer is Waitzken’s hero), but Zaillian’s cinematography makes the game of chess exciting. Remember in Martin Scorsese’s The Color of Money how the camera followed each pool ball as it snapped and cracked its way across the table? Scorsese made the relatively mundane act of two men shooting pool into a spellbinding visual treat. That’s how Steve Zaillian presents the game of chess. Each move is accentuated by close-ups of the shiny pieces as they gracefully yet quickly dance across the screen. It’s mesmerizing to watch. Pawn Sacrifice is not.