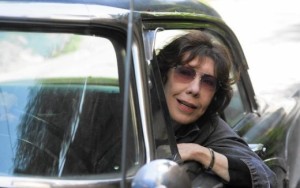 From the trailer, I assumed Lily Tomlin’s character in Paul Weitz’ new film Grandma would be the eccentric yet loveable old lady similar to Shirley MacLaine’s Aurora in Terms of Endearment. I was wrong. Within the first fifteen minutes of Grandma, Tomlin’s Elle kicks her girlfriend out of her apartment without even so much as a “Good luck,” or “I’m sorry this relationship didn’t work out,” then she proceeds to make a scene in a coffee shop because she finds the service subpar. This grandma is a mean, foul-mounted, cranky, and downright dislikable old woman. That Tomlin charms her way into our hearts by the film’s conclusion is a testament to her often overlooked strength as an actress.

The plot begins when Elle’s granddaughter, Sage (Julia Garner), arrives at her apartment one morning asking for money for an abortion. Elle is a writer whose books haven’t sold well in years. In a recent fit of financial rationalization, she’s torn up all her credit cards. Elle can’t help Sage, but she wants to. The bulk of Grandma follows Elle and Sage around the greater San Francisco area, as Elle taps everyone she knows who owes her a debt. The problem is, as I mentioned, Elle is a nasty person, and her friends are often mere acquaintances who wish she’d go away. Her few real friends are financially unable to help.

Grandma picks up steam about halfway through, when Elle calls upon her bygone boyfriend Karl, charmingly played by the always affable Sam Elliott. The conversation between Elle and Karl (complete with the obligatory dope-smoking routine, almost too common in today’s cinema) causes the resurfacing of many long-buried feelings – for each other, for Elle’s recently deceased life partner, and for their families. Elle and Karl come to terms with some of their beliefs. Here, Weitz’ script shines brightest, as these two adult characters disagree about abortion without screaming at each other or resorting to political platitudes. In fact, Grandma is not the least bit political. It is a character study about a two women (grandmother and granddaughter) forced to come to terms with a lot of family baggage. Parts of Grandma are whimsical, and others are deeper.

The final act features Marcia Gay Harden as Sage’s mother and Elle’s daughter, Judy. Lest you wonder why Sage simply didn’t ask her mother for the money, Judy is a piece of work. She’s not cantankerous enough to make a scene in a restaurant, but darn close. This is a dysfunctional family, and in a way, I’m glad Weitz’ screenplay doesn’t force a happy Hollywood ending. We’re left to believe the dysfunction continues into the future, however the three generations of females are brought somewhat closer to one another at the end, thanks to young Sage and her premature pregnancy.

Other than the fact that Elle’s malevolence is overwrought, my major complaint is that the script, while often very revealing and profound, too frequently resorts to what I call Neil Simon lines – lines no one is clever enough to speak in real life, but that sound humorous within the context of a human story. Had Weitz not relied on this soundbite dialogue, I think he could have made an even more interesting delineation of the main characters.

But these are small grievances within the context of a film which succeeds on many levels. Many have said her performance in Grandma assures Lily Tomlin of a Best Actress nomination. I don’t doubt that, but I hope Sam Elliott isn’t overlooked for Best Supporting Actor. His work here reminds me that his presence in a motion picture almost always enhances the overall work. The late Phillip Seymour Hoffman was another such actor. He never gave a bad performance, and his mere presence would elevate the quality of a so-so film to that of a very good one.

Clocking in at barely one-and-a-quarter hours, Grandma is a short film by today’s standards, but you know what? That’s perfectly fine. At its conclusion, there’s no more story left to tell. I’m glad Weitz didn’t drag out the story, or add unnecessary subplots involving peripheral characters. I’ve seen three-hour pictures that didn’t seem long enough – as though there were more I wanted to know. At 78 minutes, Grandma is just right.

Grandma also reminds us how we’ve missed Lily Tomlin since director Robert Altman’s death in 2006. (She starred in many of his films, including Nashville, Short Cuts, and A Prairie Home Companion.) This unlikeable role is not the best work she’s ever done, but it’s her most complete, fleshed-out character, and it’s her first starring role in eons. Grandma also shows us how much promise Paul Weitz shows as a director. While I don’t think Grandma is a great film, it is certainly a good one, and I expect more from Weitz in the future.

This review also appears on TheFilmYap.com.