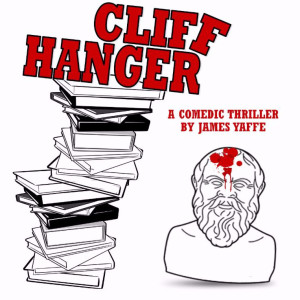 CLIFFHANGER marks the opening of Buck Creek Players’ 42nd season. The comedic thriller by James Yaffe opens Friday, September 25 and runs weekends through Sunday, October 4.  A regional theatre success in the United States, the play was later transferred to Broadway for an extended run.

A long-time professor of philosophy is looking forward to a semi-retirement position at the college where he works so he and his wife can enjoy their golden years with some security. But their plans are destroyed when his vindictive successor refuses to recommend him for the position – an act of such calculated cruelty that the usually gentle professor grabs a bust of Socrates and strikes her with it.

What now? Should he do the right thing (as he has preached to his students over the years) and turn himself over to the police? Or should he follow the advice of his more pragmatic wife and simply dispose of the body? And what about the young student who witnessed his crime and will resort to anything to get a passing grade from him? Add to this a suspicious police detective who is asking questions about the body of a woman found at the bottom of a cliff, and you have the ingredients for a suspenseful comedic thriller.

“It combines the warmth and charm of ON GOLDEN POND with almost as many plot twists as DEATHTRAP.” – Variety

Curtain Times: Fridays and Saturdays at 8pm, Sundays @2:30pm
Admission is $18 for adults and $16 for students and senior citizens (ages 62 and up).