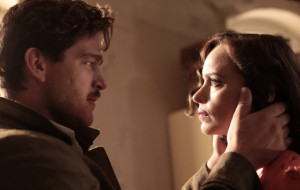 Every now and then, a movie comes along that is “perfect.” Christian Petzold’s Phoenix is such a film. I wouldn’t change a single scene; not one shot. It’s an ideal motion picture, exactly the way Petzold made it.

A phoenix is a person or thing which has been renewed or restored following some sort of calamity or tragedy. This definition has several meanings within the context of the film.

Nina Hoss plays Jewish lounge singer Nelly Lenz, whose face is badly disfigured in an accident during the liberation of the concentration camps at the end of World War II. Her friend and fellow survivor, Lene (Nina Kunzendorf) takes her to a plastic surgeon who reconstructs Nelly’s face as close to its original countenance as possible.

Nelly and Lene move into an apartment together, as neither has any remaining family members. Initially for reasons of safety, Lene concerns herself with a potential move to Palestine, where she can help with the creation of a Jewish state. But Nelly spends her nights meandering the streets of Berlin, searching for her husband (and former pianist), Johnny. With tips from various lowlifes and street performers, Nelly finally finds Johnny running a nightclub. With her reconstructed face, he doesn’t recognize Nelly, but she looks similar enough that he employs her in a plot to retrieve Nelly’s inheritance.

Johnny believes Nelly was killed in the concentration camps, but he is unable to produce any evidence. So he exploits Esther (the name Nelly uses) to portray his wife for a group of their friends, with the goal of reclaiming Nelly’s sizeable estate. He offers “Esther” half.

So how’s that for a set-up? The great German actress Nina Hoss spends the bulk of this picture playing a woman pretending to learn to be herself, if you will, for a husband whose motives are anything but pure. Sort of makes Victor/Victoria seem routine by comparison. As Johnny, Ronald Zehrfeld is flawless. He’s just hot-tempered enough to potentially be a danger to Nelly/Esther, but it’s obvious he still harbors deep feelings for his wife. And he does have some ambiguity that his plan will succeed.

Contrast this to how Hollywood would have handled this material. Johnny would have been portrayed as a jerk, Nelly would have been as pristine as Mary Poppins, and the final scene – the “big reveal” – would have been staged to satisfy even the most disconcerted of viewers. Here, the final scene is downplayed in a manner that would have made Alfred Hitchcock proud. Hence, it is the most satisfying final scene I’ve seen on screen since Bruce Dern drove his new pick-up truck through the streets of his old hometown in Nebraska. And there’s no denouement. No extra scenes at the end to tie up loose ends. As intelligent viewers, we’re invited to do so on our own.

As for the title, “Phoenix” is the name of the club where Nelly finds Johnny. It also epitomizes Nelly’s reawakening from a woman whose very identity is stripped from her, to a strong woman capable of fighting her own battles. And on yet another level, the entire Jewish race experienced a phoenix during the time between the liberation of the concentration camps and the establishment of the sovereign state of Israel in 1948.

The fact that such a seemingly “small” film should connect on so many tiers is a testament to the brilliant yet subtle direction of Christian Petzold. This may very well be the best German film I’ve seen since Volker Schlondorff’s The Tin Drum, clear back in 1979.

This review also appears on TheFilmYap.com.