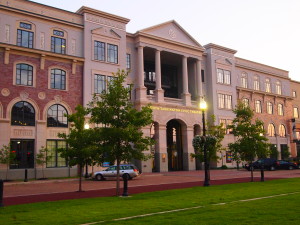 Booth Tarkington Civic Theatre announces its 2015-2016 season.  Selections range from classic favorites like Fiddler on the Roof, to the whodunit mystery, The Game’s Afoot.  Organizers believe the highlight of the 101st season of Civic Theatre is the holiday spectacular, Mary Poppins.

“As Civic moves into its next century, we are pleased to present a line up that offers something for all lovers of theatre, including Pulitzer Prize and Tony Award winning selections,” said Robert Sorbera, Artistic Director at Civic Theatre.

Little Women
September 11-26, 2015.  Based on Louisa May Alcott’s 1869 classic and set in Massachusetts during the Civil War, it is an interwoven story of the lives of the March sisters.  This musical story of their lives includes several recreations of the short stories Jo March writes in her attic studio. Sutton Foster was nominated for the Tony Award and won the Drama Desk Award for her 2005 performance.

The Game’s Afoot
October 23-November 7, 2015.  Set in 1936, a Broadway star known for his portrayals of  Sherlock Holmes, has invited his fellow cast-members to his Connecticut castle for a weekend of revelry. When one of the guests is stabbed to death, the host assumes the persona of his beloved Holmes to catch a killer.  Called “Murderously funny!” by Broadway World Cleveland.

Mary Poppins
December 11 2015 – January 2, 2016. Based on the similarly titled series of books by P.L. Travers and one of the most popular Disney movies of all time, the Broadway version played over 2,500 performances and received nominations for seven TONY Awards including Best Musical.  Favorite songs include Chim Chim Cher-ee, A Spoonful of Sugar and Supercalifragilisticexpialidocious.

Doubt: A Parable
February 5-14, 2016.  Winner of the 2005 Drama Desk Award, Tony Award and Pulitzer Prize, John Patrick Shanley’s drama is set in 1965.  A Bronx nun suspects a young, open-minded priest of improper relations with one of the male students. Ultimately, it is up to the audience to determine guilt or innocence, or whether or not such rulings are even possible.

Fiddler on the Roof
April 22-May 7, 2016.  A musical theatre tradition, Tevye the milkman tries to protect his daughters and his way of life from a changing world. Winner of 9 TONY Awards when it debuted in 1964, it continues touching audiences worldwide with its humor, warmth and honesty. This universal show is a staple of the musical theatre canon.