Merchants Of Doubt is a truly fascinating new documentary. By now, we all know the big tobacco story. You know the one about the cigarette manufacturers who knew, even prior to the surgeon general’s 1964 declaration, that cigarette smoking was physically harmful and addictive? Then when scientific studies proved that, in fact, smoking does cause cancer, heart disease, and so forth, big tobacco testified under oath that the science community was wrong. They even called “expert” witnesses who cast doubt on the results of these studies, and called for even more testing – just to be sure. 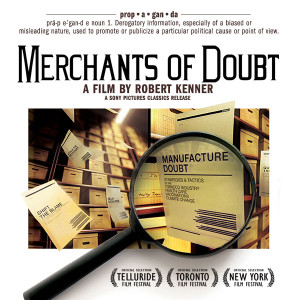 Later, when the results were simply beyond doubt, big tobacco and its “experts” continued to request no restrictions be placed on smoking, claiming our freedom was being infringed by so-called “big government” (read “big brother”). They developed the phrase “smokers’ rights,” to convince the rest of us that poor addicted smokers had no choice but to continue smoking, and that the rest of us should simply leave them alone. Lapdog “big government” bellyachers like Rush Limbaugh bought into this argument.

Then came scientific studies bemoaning the dangers of second-hand smoke. And the experts came to the rescue again, first casting just enough doubt on the science to prolong the inevitable, and buy more time for the cigarette manufacturers. Eventually, fifty years after big tobacco first acknowledged (in private in-house memos) that cigarette smoking was harmful, the CEOs of the tobacco corporations were forced to go before Congress and admit they intentionally and systematically lied to America about the known dangers of their products.

Now, just who were these so-called “experts” used by big tobacco to prolong the eventual demise of a once-powerful industry? A new documentary by filmmaker Robert Kenner attempts to shed some light. Merchants Of Doubt is based on the 2010 book of the same name, by Harvard professor Naomi Oreskes and NASA historian Erik M. Conway. Oreskes and Conway draw a fascinating correlation between the half-century of denial thrust upon us by the tobacco industry and the now-thirty-year denial of climate change by the oil and coal industries, particularly Exxon/Mobil. Ironically, some of the very same “experts” used by the tobacco industry to discredit the results of the scientific smoking studies are now being used to discredit the results of scientific climate studies.

Oreskes researched every climate study published since the mid-1980s – almost a thousand different scientific works – and found the same thing Al Gore alluded to in his 2006 documentary, An Inconvenient Truth. 100% of climate scientists agree that global warming is not only real, but is man-made. Those who disagree may have science degrees, but they do not make their livings studying the earth’s climate. Specifically, Merchants Of Doubt cites Fred Singer, a rocket scientist, and Fred Seitz, who helped develop the atomic bomb. Singer and Seitz, both of whom are interviewed in this film, were the very same physicists used by cigarette manufacturers to dilute the science condemning smoking. They have also cast doubt on the harm of acid rain, and the ozone hole. What do they have to gain by testifying against the rest of the scientific community? Money and fame.

Singer, Seitz, and a very small handful of other scientists and marketing gurus have made a living by forming conservative thinktanks, such as the Heritage Foundation, and using them as a front for fossil fuel companies like Exxon/Mobil. For example, if a Sunday morning news program featured a climatologist arguing the science behind global warming with the CEO of Exxon/Mobil, no viewer would believe the CEO to be an independent voice. He’d obviously have an agenda. But if a “senior fellow at a prominent Washington thinktank” were to argue against the climatologist, the debate would now appear to be non-biased. And that’s exactly what the big oil companies have done to buy time – just as big tobacco did throughout the second half of the twentieth century.

Merchants Of Doubt takes the additional step of implicating the media for not investigating climate change more thoroughly, and for giving equal voice to these political thinktanks. As a former member of the media myself, I am continually disappointed in what has become of our once-great political watchdog. When Walter Cronkite visited Vietnam in 1968, then returned to the CBS Nightly News to declare there was “no light at the end of the tunnel,” America listened. America took note. “If Cronkite says this war is a lost cause, then it must be,” we thought. Who carries that kind of weight now? Heck, name one television news journalist who has the courage to personally investigate both sides of the global warming debate, then declare that climate change is real and must be addressed immediately, even if that means the eventual death of the American fossil fuel industries.

If there is a light at the end of the proverbial climate change tunnel, it is addressed at the end of Merchants Of Doubt. The Tea Party movement was an outgrowth of perceived excess government regulation. Many Americans, under the guise of capitalism and free markets – don’t want their government to regulate anything – even industries destroying our earth. As in the tobacco narrative, this is the final stage of denial before big oil is forced to admit they knew all along their products were ruining our atmosphere. Unfortunately, as Dr. Oreskes states, “This time we don’t have fifty years.”

As documentaries go, Merchants Of Doubt is somewhat dry. To me, it’s not as interesting a topic as Robert Reich’s “Inequality For All,” and it’s certainly not as entertaining as a Michael Moore picture. But I loved it anyway. It brought to light nothing I didn’t know (or at least nothing I didn’t suspect), yet it still held my interest throughout, and, dare I say, fascinated me. That’s the mark of a great documentary. You owe it to yourself to see this one.

This Any Ray review also appears at TheFilmYap.com.