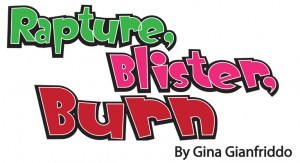 Making an Indianapolis premiere, Rapture, Blister, Burn takes the Main Stage at Theatre  on the Square, April 10 – May 2.  Director Rob Johansen has brought together a great cast in this funny story about 3 generations of women that are all still deciding who they want to be.

After grad school, Catherine and Gwen chose polar opposite paths. Catherine built a career as a rockstar academic, while Gwen built a home with her husband and children. Decades later, unfulfilled in polar opposite ways, each woman covets the other’s life, commencing a dangerous game of musical chairs—the prize being Gwen’s husband. Playwright Gina Gianfriddo provides searing insight and trademark wit in this comedy that takes a hard look at gender politics in the wake of 20th-century feminist ideals.