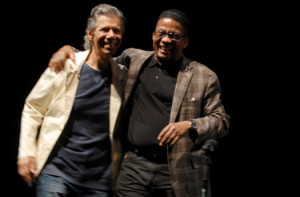 The Center for the Performing Arts welcomes two of the most influential jazz artists of the past generation – together on one stage: Chick Corea and Herbie Hancock.  Both have had a great impact on jazz music over the last fifty years and are still going strong.

Combined, these 2 artists have 36 Grammys.

Hancock has been composing jazz albums since 1963 (Taken Off) and was even a member of the Miles Davis Quintet for for five years in the early 1960’s. Hancock’s later created his own band, the Headhunters, which put out the first jazz album to go platinum. Hancock is also very well know for composing scores to a number of film and television shows such as Blow Up (1966) and Round Midnight (1986) for which the latter he won an Oscar. He has remained a very active composer and performer, winning two Grammy Awards for Herbie Hancock’s the Imagine Project (2010).

Corea is a renowned pianist and composer in the jazz field and has won an astonishing twenty-two Grammy awards and nominated for a total of sixty-three for his work. Even outside of jazz Corea has been extremely successful having parlayed his talents into bebop, fusion, chamber music, and children’s songs. This isn’t the first time he has performed with Hancock either. The two originally got together in 1978 and went on to perform two live-duet albums together.

For more details on the concert visit the Center for the Performing Arts website.