Tony DeSare at The Cabaret 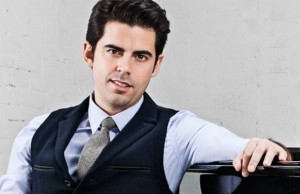 Acclaimed vocalist/pianist/composer Tony DeSare presents a post-modern version of the New York nightclub shows of the 1950s, exploring songs from noir to new, plus a few originals. The only requirements are martini and a sophisticated, swinging melody

Tony DeSare: NightLife
The Cabaret at The Columbia Club

Named a “Rising Star” Male Vocalist in Downbeat magazine’s 2009 Critic’s Poll, DeSare has lived up to the distinction by winning critical and popular acclaim for his concert performances all over the world. From jazz clubs to Carnegie Hall to Las Vegas, Tony has brought his fresh take on old school classics around the globe. DeSare has three top ten Billboard jazz albums under his belt and has been featured on the CBS Early Show, NPR, and the Today Show.

Also an accomplished award-winning composer, Tony won first place in this year’s USA Songwriting Contest, and has also written the theme song for the motion picture, My Date With Drew, along with several broadcast commercials.

“DeSare belongs to a group of neo-traditional upstarts stretching from Harry Connick Jr. to Michael Bublé and Jamie Cullum.” -USATODAY