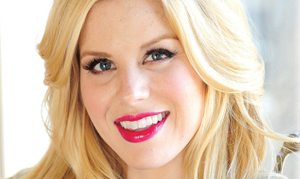 Known for her leading roles in NBC’s Smash and Broadway’s Wicked and 9 to 5: The Musical, she is one of the fastest rising stars in the world of entertainment.   Megan Hilty joins the Indianapolis Symphony Orchestra to perform many of the songs from her new solo album, It Happens All the Time.  Also included in the programs are many Broadway favorites and contemporary hits.

In a relatively short period of time, Megan Hilty has risen from understudy on Broadway to a star of stage, screen, and music.  She is most widely known for her role on NBC’s Broadway based series, Smash. She has kept busy since the series’ demise.

On her hiatus between Smash‘s first and second seasons, Megan starred in the New York City Center production of Gentlemen Prefer Blondes as Lorelai Lee, a role made famous by Carol Channing and Marilyn Monroe. Megan received rave reviews for both the production and its cast recording.

In 2013, Megan released It Happens All the Time, her first solo album and also made her Carnegie Hall debut. Megan also returned to TV with NBC’s Sean Saves the World starring Sean Hayes.

Megan currently makes frequent concert appearances, both with symphony orchestras throughout the United States and in solo concert at smaller venues. She also regularly performs in a variety of special events, such as the Macy’s Thanksgiving Day Parade or Christmas in Washington.

She also maintains an active voiceover career, as Megan has provided the voice of “Rosetta” in the Disney Fairies series and the “China Doll Princess” in the animated feature Legends of Oz: Dorothy’s Return.