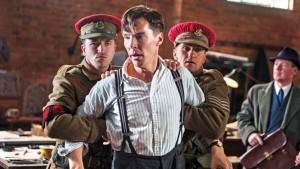 Benedict Cumberbatch is an excellent young British actor, who hits a home run in his latest film, The Imitation Game. Unfortunately, the film itself only makes it to second base. Morten Tyldum’s The Imitation Game tells the fascinating story of British mathematician Alan Turing, who was hired by the British government to crack the Nazi code known as Enigma. Turing was later prosecuted for being a homosexual, and committed suicide in 1954. That’s a lot of material to cover in one motion picture, and I wish Tyldum had stuck with the Enigma project.

Originally, Turing is hired as part of a team of crack mathematicians and code breakers, but it doesn’t take long for the others to turn against him. Brilliant yet socially awkward (reminding me of young Stephen Hawking in The Theory Of Everything, which is a superior film), Turing has a habit of belittling those with whom he is assigned to work. He’s simply not “one of the guys.” Furthermore, he takes all conversation literally. Thus, not only can he not tell a joke, but he’s not aware when others are joking with him. Colloquialisms are lost on Turing. This mental and social tug-of-war between Turing and his colleagues is one of the most interesting aspects of The Imitation Game.

When Winston Churchill himself puts Turing in charge of the project, he promptly fires those he considers inferior, then holds a contest to find someone to replace them. That person is Joan Clarke, remarkably played by fellow Oscar nominee Kiera Knightley. Although her hairstyle is too modern for a World War II story, her character breathes fresh air into a story just beginning to wear thin when she arrives on the scene. Clarke develops a crush on Turing, and this is where we first learn of the homosexuality that would eventually lead to his personal downfall.

Unfortunately, this takes place over halfway through the picture. Tyldum then spends so much time examining the homosexuality issue, the focus of the film abruptly changes. I believe The Imitation Game would have worked better had it either (a) made a statement about Britian’s lack of respect for and understanding of homosexuals in the 1940s and ‘50s, or (b) given us an insider’s look at how Alan Turing essentially invented the computer to break the Nazi radio code during the war. It has a hard time doing both. Personally, I found the codebreaking story more fascinating, and I wish more of an attempt had been made to help us understand some of the mathematics behind Turing’s construction of the first computer. Then there’s a side story about a possible Soviet spy working for Turing, but that plot strand is never developed.

Another complaint I have with the script is that it moves too frequently among three time periods – Turing’s boarding school youth, the Enigma project itself, and the 1951 investigation into a break-in at Turing’s home, which is used to bookend the story, albeit unnecessarily – which adds to the confusion. I would have like to have seen all the boarding school scenes (which actually introduce us to Turing’s homosexuality) first, then the Enigma project scenes. This structure worked great in The Godfather Part II. It would have worked great here.

But all objections aside, Benedict Cumberbatch is exceptional as Alan Turing, fully capturing his genius and his social ineptitude. He’s earned a well-deserved Best Actor Oscar, and probably should win it (but won’t) over Michael Keaton’s has-been actor in Birdman. Kiera Knightley also scores as Turing’s sympathetic colleague.

As I continue to compare The Imitation Game to The Theory Of Everything, I can’t help but wonder if a similar approach would have helped The Imitation Game. In other words, what if the story were told from Joan Clarke’s point of view, the way The Theory Of Everything was told from the viewpoint of Stephen Hawking’s wife? I can’t say for sure whether that story construction would have succeeded here, but if I were the director I’d be willing to give it a try.