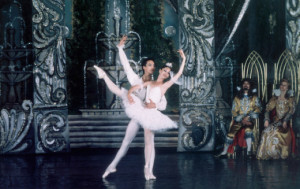 This is the crown jewel of legendary choreographer Marius Petipa’s career as The Russian Ballet Theatre brings Sleeping Beauty to Central Indiana for three performances.

This is the age old magical fairy tale of the beautiful, sleeping princess who awaits the kiss of her prince. The tale is made even more enchanting as it is set Tchaikovsky’s magnificent score.  A grand theme of good versus evil, the ballet is about the story of Aurora, who has been cursed since birth by the evil fairy Carabosse. After pricking her finger on a spindle, the princess and her whole kingdom fall into a deep sleep that will last one hundred years until she is saved by the brave prince, Désiré. Performed by a company of some 50 performers who are dedicated to the timeless tradition of classical elegance of the Russian National Ballet Theatre.

The Tarkington Theatre at
The Center for the Performing Arts

To view a video of the Russian National Ballet Theatre and connect to the Center for the Performing Arts website, click here.

Founded in Moscow during the transitional period of Perestroika in the late 1980s, The Russian National Ballet Theatre was an emerging company where many of the great dancers and choreographers of the Soviet Union’s ballet institutions were exercising their new-found creative freedom.  Many new, vibrant companies were dedicated not only to the timeless tradition of classical Russian Ballet but to invigorate this tradition.  This was a time when Russians began to accept new developments in the dance from around the world.

Today, the Russian National Ballet Theatre is its own institution, with over 50 dancers of singular instruction and vast experience, many of whom have been with the company since its inception.