You’ve probably seen the previews for Still Alice, the story of a middle-aged woman’s battle with early-onset Alzheimer’s Disease.  You might be wondering if Still Alice rises above the level of the typical “disease of the week” television movie.  I can tell you this:  It does, but it’s not Best Picture material.  (Since it wasn’t nominated for Best Picture, I guess it doesn’t matter, but let’s just say it’s not 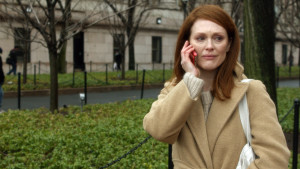 one of those pictures the Academy overlooked.)  The real treat here is Julianne Moore’s performance.  This should be the role to (finally) win her the Best Actress trophy.

I’ve always liked Julianne Moore.  She possesses some of the same attributes as Meryl Streep.  She’s not the classic Hollywood beauty.  She’s achieved her success the old-fashioned way – by simply being one of the best actresses in the history of motion pictures.  Here, Moore creates a sympathetic character at the outset, then lets us burrow deeper into the despondency of one of the most taxing of man’s physical maladies.  There is no cure for Alzheimer’s.  Friends and family are obligated to helplessly tend the afflicted.  But Still Alice doesn’t wallow in self-pity.  Yes, we feel sorry for Moore’s character, but never does she beg victimhood.

Moore plays Dr. Alice Howland, a Columbia University professor of linguistics, married to John, himself a college professor.  Her disease begins innocently enough when she can’t remember a word – right in the middle of a lecture class.  Soon, she gets lost while jogging through very familiar territory near her home and work.  She is diagnosed with early-onset and familial Alzheimer’s – meaning it’s passed down from generation to generation.  This puts additional pressure on Alice’s three benevolent children – all young adults.

Alec Baldwin plays the loving and supportive husband, who has a very marginal desire to not be bothered by Alice’s condition and needs.  For the most part, his character is sympathetic.  The Howland’s three children are also supportive, but the real stand-out is Kristen Stewart of Twilight fame, as middle child Lydia.  In her first “adult” role, Stewart nails her part as the most independent-minded of the Howland kids.  She’s skipped college in favor of a fledgling stage career with an upstart theatre company in Los Angeles – much to the dismay of her mother.  As is often the case in these situations, those closest to the Alzheimer’s victim (the husband, the college-grad daughter who still lives close) find it most difficult to deal with the declining mental state of the afflicted party.  It’s the daughter who rarely sees her mother who accepts Alice’s condition, and communicates with her on her own ever-reduced level.  If anything, Alice’s bout with Alzheimer’s allows her to draw closer to Lydia.  The final mother-daughter scene is outstanding, without being needlessly weepy.

Stewart should have received a Best Supporting Actress nomination.  Her performance tops three or four of those of the nominated actresses.  But again, this is Stewart’s first performance in an “adult” film.  I expect to see more from her in the future.

As for Julianne Moore, she should have won at least one Supporting Actress statuette by now (actually three, by my count – 1993’s Short Cuts, 1997’s Boogie Nights, and 1999’s Magnolia).  This time, particularly since Amy Adams wasn’t even nominated for Big Eyes, the award is hers.  It’s well-deserved.  She is one of our greatest actresses, and this performance is the crowning achievement of her career.