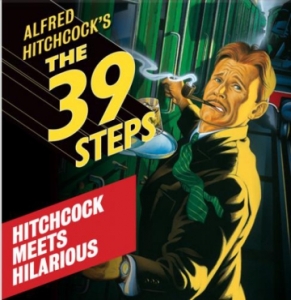 Mix a Hitchcock masterpiece with a juicy spy novel, add a dash of Monty Python and you have Alfred Hitchcock’s The 39 Steps.

Seeking a frivolous night out at the theatre, Richard Hannay is lured into a world of intrigue by a mysterious woman claiming to be a spy. When she winds up dead in his flat, he flees London with the police hot on his trail. This is a classic portrayal of one man’s flight from wrong accusation through a series of misadventures and old fashioned romance.

THE 39 STEPS features a cast of four actors who, against all odds, breathlessly and hilariously attempt to reenact all of the characters, locations and famous scenes in Hitchcock’s 1935 film thriller with just a few props and a lot of theatrical ingenuity and split second quick changes.