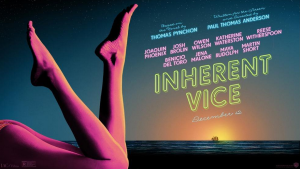 Even the great Stanley Kubrick directed one dud – 1999’s Eyes Wide Shut. Now it’s Paul Thomas Anderson’s turn.  His latest, Inherent Vice is a mess. Anderson is currently, in my humble opinion, our greatest director. Not only have I liked every one of his films so far, four of them were my favorite pictures of their respective years – culminating in 2012’s The Master, a tour-de-force for the late Phillip Seymour Hoffman. I was obviously intrigued and captivated about seeing Anderson’s latest. And I couldn’t be more disappointed.

Based on Thomas Pynchon’s 2009 novel, Inherent Vice stars Joaquin Phoenix as a drugged-out hippy private investigator named Doc Sportello, asked by his on-again/off-again girlfriend to thwart a plot to send her wealthy real-estate mogul boyfriend to an insane asylum. In a seemingly unrelated case, a woman asks Doc to locate her missing sax-playing husband (Owen Wilson). The set-up sounds interesting. I was already thinking of a hippie-culture version of Chinatown. And who better to handle the methodic unraveling of a complex plot than Anderson. Boy was I wrong.

The knock against The Master was that it lacked a coherent structure – that it didn’t have enough plot. Again, I personally was not bothered by this format, but it annoyed some critics and viewers. Anderson must have been listening, because Inherent Vice suffers from too much plot. I realize this film is based on a novel, but had Anderson simply stuck to one or two story threads, it would have been easier to follow. This is 1970 Los Angeles, and Pynchon & Anderson hit us with everything – and I mean everything – we can imagine. Not long after the opening sequence, we’re introduced to a radical Black Panther, then a Chinese brothel masquerading as a massage parlor, a drug-smuggling ring, a protest at a Richard Nixon speech, a Ouija board, a coke-snorting dentist, a Nazi supremacist, and a no-nonsense LAPD cop, played to the hilt by Josh Brolin. There’s so much going on in this picture, you’ll need to take notes and design a flow-chart just to keep everything straight.

And the low-key acting doesn’t help. Robert Altman was a master director of “real life” acting – where his actors didn’t mug for the camera, had no big monologues, and didn’t seem to realize they were even being filmed. I’m assuming that style was Anderson’s goal here, but it doesn’t work. Joaquin Phoenix, so forceful and dynamic as the neurotic World War II vet in The Master, mumbles his way through this material so dreadfully I wondered if he was even awake. I realize he’s supposed to be a hippie, but even hippies rolled out of the proverbial bed once in a while. And I realize, Inherent Vice is a novel, but when a guy smokes as much weed as Doc, there’s no way he could effectively function as a private investigator. Then again, after watching Inherent Vice I’m not sure he does effectively function as a private investigator. Doc reminds me somewhat of the title character in Barry Lyndon – he simply reacts to his surroundings, but rarely initiates any action on his own. Perhaps this material wasn’t meant to be filmed.

Katherine Waterston (daughter of Sam) plays Shasta Fay, Doc’s sometimes girlfriend. Yes, she’s a hippie too; and yes, she mumbles too – although, unlike Doc, she smiles often, and her hair is kempt. Benicio Del Toro is serviceable as Doc’s attorney friend, and Reese Witherspoon is fine as the Deputy District Attorney, but Owen Wilson doesn’t seem to know which direction is north, and Martin Short is embarrassingly unfunny as the coke-snorting dentist.

The actor who makes the best showing here is Josh Brolin as Bigfoot Bjornsen, the hard-nosed LAPD cop. He’s convincing, although we’ve seen him play this sort of character so many times now that his mere presence in this picture is somewhat underwhelming.

Again, I wonder exactly why a great director would imagine that this material is worth filming in the first place. Not only are most of the characters incapable of comprising a coherent thought, but the screenplay itself is devoid of any coherent thoughts. Paul Thomas Anderson is a great director, making Inherent Vice all the more troubling. Anderson isn’t some novice. I hope he’s merely bit off more than he can chew. No crime there – I’d rather see a director overreach than under – but that doesn’t make me ever want to see it again, nor recommend you do likewise.