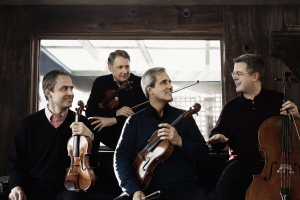 Time Magazine declared them “America’s greatest quartet” – and, they have been praised worldwide for its insightful performances, dynamic artistry, and technical mastery.  Emerson String Quartet has garnered nine Grammy Awards including two for Best Classical Album, an unprecedented honor for a chamber music group.

With more than thirty acclaimed recordings, Emerson String Quartet has earned three Gramophone Awards, the Avery Fisher Prize, Musical America’s “Ensemble of the Year”, in addition to their collection of Grammys.  Both in recordings and in live performances, Emerson String Quartet has collaborated with many of the greatest artists of our time. Formed in 1976 and based in New York City, the Quartet took its name from the American poet and philosopher Ralph Waldo Emerson.