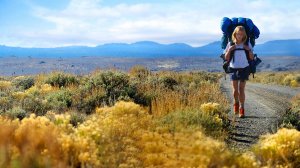 One of the great songs on Simon & Garfunkel’s landmark 1970 album “Bridge Over Troubled Water” is “El Condor Pasa.” Based on a Peruvian folk melody, “The Condor Passes,” it’s the song that features the line, “A man gets tied up to the ground… He gives the world its saddest sound… its saddest sound.” Had music videos existed in 1970, I’ve often wondered what a video for “El Condor Pasa” would look like. Would it depict a condor soaring majestically over a city whose inhabitants labor away without realizing the grandeur above them? Would it show a man breaking free of the proverbial chains of his life to begin a new journey?

I think I’ve found the answer. Jean-Marc Vallee’s Wild stars Reese Witherspoon as Cheryl Strayed, an author who, in 1995, walked all 1100 miles of the Pacific Crest Trail – a hiker’s dream path, surmounting the highest peaks of the Sierra Nevada and Cascade mountain ranges through California, Oregon, and Washington. As the movie unfolds (to the periodic aural beauty of Simon & Garfunkel), we simultaneously learn Strayed’s backstory, and the reason why she decided to embark on such an arduous undertaking. I can’t give away much information here without ruining Wild for you, but suffice to say Strayed was at a turning point in her life.

As Strayed, Witherspoon (already a Best Actress winner for 2005’s Walk The Line) gives the best performance of her career. She’s sturdy and headstrong, yet occasionally vulnerable, and always focused on her task. As she meets various residents and travelers along the way, the first part of her life is told in a series of flashbacks. Typically I don’t like to see directors rely too heavily on flashbacks. I figure if the present-day story is interesting enough, the actors can simply communicate their histories to one another as part of the screenplay dialogue. But here, flashbacks are necessitated by the fact that Strayed spends most of her hiking hours alone with her own thoughts. This is perhaps the one time I’ve seen such heavy use of the flashback technique where the recollections seem to flow naturally from the script. Fortunately, the present-day story (read “The Hike”) is infused with such an array of interesting characters that I never felt like the backstory was predominant. In the sense that the script must find that perfect balance between present-day and past, Nick Hornby’s screenplay is outstanding. Adapted from Strayed own memoir, I’d like to see Hornby win Best Adapted Screenplay at the Oscars.

And Reese Witherspoon never ceases to amaze me. She’s already one of our best actresses, and Wild is, so far, the apex of her career. She hits every note just right – from early frustration to later determination, Witherspoon’s Cheryl Strayed is perhaps the most interesting character to appear in a film this year.

The great irony of Wild for me is that while the panoramic views of the beautiful countryside become more breathtaking as the picture progresses, the more claustrophobic I felt. In other words, the more I learned about Cheryl Strayed pre-hike life, the more I wanted her to fly away. If her hike was to be therapeutic, I wished she could soar like the proverbial condor of “El Condor Pasa.”

“Wild” depicts a temporary cessation in the troubled life of a woman who simply had to “get away.” As the film drew to its conclusion, I wondered what the next chapter in her life would be. But Wild is so great, I never believed I had to know. Truth is, Wild is so complete there’s nothing else I want, or need, to know about Cheryl Strayed’s journey. I’m very glad I saw this film.