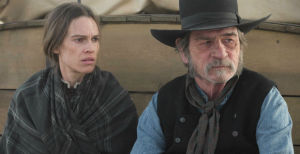 Last time Tommy Lee Jones directed a film was his 2007 flick, The Three Burials of Melquiades Estrada, (which actually premiered at the Cannes Film Festival two years prior). He won Best Actor at Cannes that year, essentially playing his usual crusty, irritable self, with the added augmentation that his character was perhaps just a little crazy and unpredictable. Now he’s done it again. In The Homesman, he directs himself as a crusty, irritable old claim jumper and all-around good-for-nothing, who borders on crazy and unpredictable, especially when he drinks.

But unlike in Melquiades Estrada, Jones’ George Briggs is not the most interesting character in The Homesman. That honor belongs to the great Hilary Swank – at 40 years of age, already the recipient of two Best Actress Oscars. Here, Swank plays a hard-working, unmarried farmer in the rough pre-Civil War Nebraska Territory. The fact that her Mary Bee Cuddy is still single seems to bother no one but herself. But none of the single townsmen are interested, professing Cuddy to be both “plain” and “bossy.”

When the local pastor requests a volunteer to transport three unstable women to a church in Iowa that cares for the mentally ill, Cuddy raises her proverbial hand. Ironically, all the townsmen seem to agree she’d be the best choice. But Cuddy, wisely, doesn’t want to endure the journey alone. Enter Tommy Lee Jones’ George Briggs. Why this loser? The script says it’s because she saves him from hanging by making him promise to help her. I believe she chooses Briggs because (a) he’s unattached – no family, no farm, and (b) he knows how to handle the inevitable obstacles of the journey – Indians, outlaws, severe winter weather. The two make an odd pair. He, the cantankerous old gunslinger, and she, the strong, upright, deeply religious, independent spinster.

As you might expect, the two don’t get along. Fortunately as The Homesman progresses, they don’t magically become best buddies. In a more realistic fashion, they simply learn to tolerate one another. Each of the lead characters changes a little, but not unbelievably so. Briggs begins to respect Cuddy, as well as gaining at least a modicum of concern for the three “crazy” women in their care. Cuddy learns how to at least communicate with Briggs in such a way that he’ll do what she wants. It’s a bit unrealistic that such a liberated woman would entertain the idea of settling down with a chiseled old curmudgeon, but she does. And she’s a little upset he’s not interested.

And this is essentially my only complaint with the screenplay, which Jones adapted from Glendon Swarthout’s 1988 novel. I do want to mention Rodrigo Prieto’s first class cinematography. He gives us wide panoramic views of the desolate plains countryside, while also focusing on Jones’ lined and roughhewn face. Each wrinkle seems to represent a hidden and unspoken backstory of army desertion, cattle rusting, and God only knows what. His life, essentially unexamined by the script, must feature a variety of episodic twists and turns similar to the present quest. Nor are we treated to any real backstory of Swank’s character. And this is probably a smart move. The camera and the somewhat sparse dialogue tell us all we need to know about these two.

Along the way there are adventures, to be sure. And at the end, Jones’ character connects with a young girl who reminds him of Swank’s. But this tender moment is then superseded by another episode of crazy, drunken behavior. The bottom line is that while Briggs may not have truly changed during the course of this film, he’s at least able to see the good in some people.

Is that enough to earn The Homesman Oscar recognition? Probably not. Swank won’t win a third Oscar, and Jones’ direction probably won’t either. But my fear is that this picture will be buried amongst the heavy-hitters of the season. It probably would have found an audience had it been released in the summer – the token adult film surrounded by the usual bevy of superheroes.

The Homesman is good enough I’d like to see it again. It’s not the best, but it’s certainly worth a look.