By now, you’ve surely heard about, or seen the trailer for, Damien Chazelle’s latest picture, Whiplash. That’s the one in which veteran character actor J.K. Simmons plays a loud, obnoxious, condescending jazz band director at a prestigious music school. If you’re like me, you’re not thrilled about seeing this one. A little of that screaming goes a long way. Please allow me to tell you how misguided your decision to skip this one is. 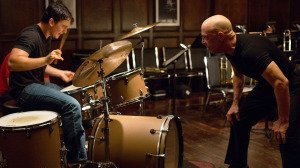 At first, Simmons (the father in Juno) struck me as a jazz band version of R. Lee Ermey’s drill sergeant character in Stanley Kubrick’s Full Metal Jacket. In both cases, the attitude is merely theatre, designed to drastically alter the mindsets of young men. But the difference is that Ermey’s character attempted to make soldiers of men who might otherwise panic when faced with a life-or-death situation. Ermey’s ranting and raving was, in a way, vital to the survival of our nation – at least that’s the way he saw it. But Simmons? His Terence Fletcher is bellowing at music students – not soldiers. Yes, I initially found his character to be way over the top.

But I soon realized there was a method to his madness. Fletcher’s life was changed when he read about Charlie Parker’s drummer, who threw a cymbal at young Parker when he didn’t think the future saxophone aficionado was playing up to his potential. From that moment, Fletcher made it his lifelong goal to berate greatness, if you will, from his students. Fletcher is not a guy who ever says, “Good job.” He can’t be pleased; he can only be impressed.

One day, he personally picks a freshman percussionist named Andrew to be an alternate player in his top jazz band. Fletcher sees enough potential that he subjects Andrew to his discordant teaching style in hopes that he may become the next Buddy Rich. What ensues is a fascinating game of one-upmanship, as these two strong personalities do battle against each other – Fletcher, to bring the musical genius out of Andrew; and Andrew, to keep from being insulted and dishonored in the process.

Still not convinced you oughta pluck down cash for this one? Let me tell you the two leads are out of this world. I wouldn’t be surprised to see J.K. Simmons win (not just nominated, but win) the Supporting Actor Oscar – even though I think both leads belong in the Lead Actor category, but that’s another discussion for another day. And Miles Teller (so convincing in last year’s The Spectacular Now) is every bit as robust in his role as Andrew. In fact, Teller has the same problem Tom Cruise had in Rain Man. How do you turn in a persuasive performance playing the straight man against a triumph of acting? But in both cases (Teller’s and Cruise’s), they are able to match the exultation of the actors in the more glamorous roles. Teller certainly deserves a Lead Actor nomination.

I’d also be remiss not to mention both the script and the cinematography. Damien Chazelle’s screenplay is succinct, a la David Mamet’s screenplays. There are no “extra” scenes, no filler material, and the abrupt ending is perfect. Chazelle wisely opts to leave out the denouement scenes, in a story of two individuals who respect one another but don’t particularly like one another.

And Sharone Meir’s cinematography deserves to be nominated as well. The musical sequences are peppered with rapid cuts and edits. Remember Martin Scorsese’s The Color Of Money, in which the camera seemed to concentrate on the rapid motion and beautiful color of the pool balls? Scorsese made the relatively mundane act of two men shooting pool into a spellbinding visual treat. Same thing here. We’re not simply treated to watching a twelve-man jazz band belt out a tune. Instead, the camera pops from close-up shots of sweaty, hard-working Andrew with perfectionist Fletcher, interspersed with quick shots of the beautiful, shiny brass instruments. Viewers become mesmerized, as the music seems to crackle right off the screen. It’s a real masterpiece of filmmaking, without being “gimmicky,” as the long tracking shots were in Alejandro Inarritu’s recent Birdman.

In short, Whiplash is the best film I’ve seen since Richard Linklater’s Boyhood was out this summer. During awards season, I hope Whiplash doesn’t become a forgotten memory, buried amongst all the big-budget overhyped cinema of the year. This one’s a gem, and I can’t wait to see it again.