A couple years ago, there was a major motion picture called Cloud Atlas. Never heard of it? That’s because it bombed. It was a three-hour marathon of six non-intertwining stories, one of which held my interest. The least interesting depicted a futuristic world of cannibalism and idol-worship on the big island of Hawaii. I wrote at the time that Tom Hanks and Halle Berry are so bad in this story they seem like amateurs. The dialogue is stilted and ridiculous. I couldn’t believe Warner Brothers had actually green-lighted this project. 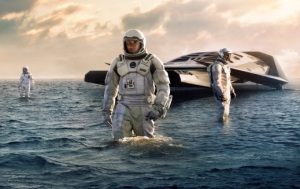 Now I’ve seen something similar. Christopher Nolan’s Interstellar is a three-hour convoluted mess of science fiction, with a potentially interesting story buried somewhere deep inside the dialogue. To wit, in the future, the world is approaching the end of its habitability. I don’t know why. It has something to do with crop blight, but if the explanation was in the script, I must have missed it. NASA has developed a secret plan to explore other potentially viable planets. Impossible, you say? Ah, but there is a “wormhole” near Saturn, which allows astronauts to explore five promising alternatives for the salvation of humanity. (A wormhole is a theoretical means of quickly traveling through space and time, based on Einstein’s theory of relativity. Think of it like Han Solo traveling at warp speed, only it’s supposed to sound more plausible.) I’m not sure anyone ever explained why all five planets were able to appear in the same place at the same time, when in reality, they must have been light-years apart from one another.

The always-reliable Matthew McConaughey plays NASA pilot Cooper, and Anne Hathaway is Amelia, a scientist also aboard the rocket ship. In the best decision writers Jonathan and Christopher Nolan made, no romance is ever suggested between the two leads. I only wish they had done a better job of explaining what Interstellar is all about.

After landing on one of the planets, Cooper and Amelia meet up with another scientist, Dr. Mann, played by Matt Damon, who was stranded on a previous mission. In the strangest plot twist, Dr. Mann tries to kill Cooper for some unexplained reason. Up until this point, I believed I could suspend my disbelief enough to recommend Interstellar. But why wouldn’t two NASA employs be able to work together? Is it because Nolan wanted Dr. Mann’s shuttle to explode while attempting to dock with the rocket? Could be. Unlike last year’s excellent Gravity, Interstellar is a loud, busy picture, overstuffed with special effects, unnecessary music, and screaming characters.

Eventually, Cooper and Amelia venture into a black hole (yes, on purpose; don’t ask why) where time appears spatially, allowing Cooper to visit his daughter in her childhood and warn her to lead humanity to explore other worlds. Ironically, we see this warning at the beginning of the film, before the voyage even begins. It doesn’t make sense then, but for my money, it never makes sense at the end of the picture either. Somehow, Cooper doesn’t age, yet his young daughter appears as an old woman at the end. Again, it has something to do with Einstein’s Theory of Relativity – and therein lay the problem: Nobody understands the Theory of Relativity! All the longwinded scientific explanation of the cast (which eats up most of the dialogue) sounds like a bunch of existential mubmo-jumbo from the original “Star Trek” series. It’s impossible to follow, due to its complexity, yet it’s impossible to suspend disbelief, because the plot is so outlandish.

Coming on the heels of Alfonso Cuaron’s far superior Gravity last year, Interstellar pales in comparison. Much as Stanley Kubrick did in 2001: A Space Odyssey,  Cuaron managed to nail the silence of outer space.Gravity was a quiet, reserved film, which highlighted the loneliness of space travel. Interstellar is blaring and assiduous – like a semi-serious Star Wars crossed with the garbage science of Star Trek. Interstellar is an old-fashioned Saturday matinee, revved up past power ten with top-notch actors, IMAX special effects, and a music score that just won’t stop.  Interstellar is so big and expensive, it was financed by both Paramount and Warner Brothers.

It’s moviemaking on a grand scale. And at that level, it fails. It might have worked, had it simply been stripped down a notch or two. And it’s probably just me, but I have a problem with the name. Why would anyone choose an adjective as the name of a movie? Interstellar what? Where’s the evasive noun? Probably sitting on the cutting-room floor with Einstein’s Theory of Relativity.