In 2013, I wrote an on-line column for the Current In Carmel stating that I thought Edward Snowden should be given a parade rather than imprisonment.  I still believe that.  Lest you’ve forgotten, Snowden was the private contractor working for the National Security Agency who exposed thousands of classified documents revealing a systematic pattern of global surveillance by our own government against our own citizens.  Consequently, the government revoked his passport while he was out of the country.  Snowden is now in exile in Russia, seeking asylum in the European Union. 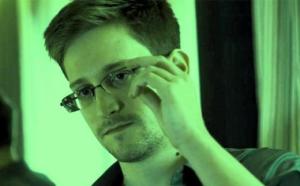 Snowden is now the subject of a fascinating new documentary, Citizenfour,  which is unique in that the drama unfolds before us in real time.  In other words, director Laura Poitras doesn’t interview Snowden and others after the fact, as in most documentaries, but her camera and crew are there holed up in Snowden’s Hong Kong hotel room as the classified documents are released to several media outlets.  Her camera captures his inherent craving to expose illegal and unconstitutional government actions on moral grounds, while wrestling with the fact that his plan may land him in prison.  It’s simply that important for him to let the world know.

While we all know that the methodical collection of personal data did not end with the Obama Administration (as previously promised by candidate Obama), it’s fascinating and somewhat horrifying to watch Citizenfour as Snowden reveals these secrets to Guardian columnist Glenn Greenwald and director Poitras.  Now, how did Poitras become involved?  How did she know Snowden in the first place, let alone that he was on the verge of revealing government secrets?  Snowden, using the code name Citizen Four, sent an encrypted e-mail to Poitras to see if she would be willing to film Greenwald’s interview with him in Hong Kong, as she had already shown an interest in national security reporting, and was one of the initial supporters of the Freedom of the Press Foundation.  In other words, the subject of this documentary chose the director!

As director, Poitras expertly reveals the increasing tension in Snowden’s face, and the claustrophobia of his Hong Kong hotel room.  After Greenwald makes public the NSA spying program, Poitras’ camera begins to cut more quickly between scenes, heightening the sense of suspense.  Most impressive are a couple of 10 to 15 second clips of a silent Snowden looking through his window at the world outside, knowing that he may never be a part of it again.  Ironically, the US government responded by charging Snowden with a violation of the Espionage Act, a World War I era law intended to prevent the support of America’s enemies during wartime.  Citing this law seems to imply that our government considers its own citizens enemies, due to the fact that the NSA has, apparently, collected data on all of us.  It’s an odd twist to the “plot.”  In many ways, just as in John Boorman’s 1972 classic, “Deliverance,” the most interesting segment of the film occurs after the climactic scene – in this case, Greenwald’s making the spying program public.

Citizenfour left me wondering how our government can execute such an illegal and unconstitutional agenda and not expect to be divulged.  Granted, exposing secrets is illegal, but which is the more severe crime?  This picture begs us to question what was wrong with issuing court orders when one is thought to have committed a crime.  All phone, text, and e-mail activity could be apprehended after the court order is issued.  But instead, our government collects this data on each of us.  Constantly.  In my mind, Edward Snowden is an American hero for exposing the crimes of our government – much as Daniel Ellsberg was a generation ago.

As a side note, I may be the only person to make this connection, but Snowden was the name of the young bombardier who died when his plane was shot down early in Joseph Heller’s landmark novel, “Catch-22.”  Heller’s Snowden was a young innocent soldier, not well-known yet by his fellow troops, whose life ended much too soon.  In a way, Edward Snowden wasn’t particularly well-known either, and now his life appears to have ended prematurely as well – at least his life in his home country of America.

Citizenfour is a spellbinding, revolutionary view of history as it unravels before our eyes.  I can’t imagine it won’t win Best Documentary at February’s Oscars.