It is just not the holiday season without experiencing this beloved retelling of White Christmas – through the music and lyrics of Irving Berlin!  This is a holiday favorite in an all new production. Based on the film, this musical adaptation features 17 Irving Berlin songs.

Included in the score Berlin songbook classics such as “Sisters”, “I’ve Got my Love to Keep me Warm”, “Snow”, Count Your Blessings Instead of Sheep”, “We’ll Follow the Old Man”,  “Love, You Didn’t do right by Me / How Deep is the Ocean” and, of course, “White Christmas”. 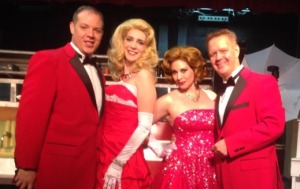 Army Veterans Bob Wallace and Phil Davis have a successful song-and-dance act after World War II.  With thoughts of romance, the two follow a duo of beautiful singing sisters en route to their Christmas show at a Vermont lodge –  which just happens to be owned by Bob and Phil’s former army commander. Pictured are Bryan D. Padgett,  Elizabeth Oates Orr, Jessica Crum Hawkins and Ted Jacobs (l to r) appearing as Phil Davis, the Haynes Sisters (Betty and Judy) and Bob Wallace, respectively.

Based on the 1954 Paramount Pictures film of the same name and written by Norman Krasna, Norman Panama and Melvin Frank.