No other artist in American popular music has recorded and performed for so long at such a high level of excellence as Tony Bennett.  He has become one of the most enduring talents of the century and is as timeless and treasured as the songs he made famous. Testament to his continual popularity – he has sold more than 50 million records worldwide, including 10 million in the last 10 years. 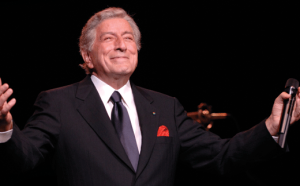 Few artists can match the productive longevity of Tony Bennett musical accomplishments. He continues to have the kind of contemporary appeal that has earned him new albums charting in the 1950’s, 60’s, 70’s, 80’s, 90’s, and now in the first two decades of the 21st century.  His successful collaborations are as numerous as they are surprising –  including a collaboration with Lady Gaga.  Well into his 80’s, Bennett won 2 Grammy’s in 2012 for his album Duets II.

As a teenager in Queens, NY, Tony sang while waiting on tables.  He enlisted in the Army during World War II and while in Europe he performed with military bands. He later had vocal studies at the American Theatre Wing School.  The first time Bennett sang in a nightclub was in 1946, but his big break came in 1949 when comedian Bob Hope noticed him working with Pearl Bailey in Greenwich Village in New York City.

He recalls Hope saying, ‘Come on kid, you’re going to come to the Paramount and sing with me.’  Hope told him he didn’t care for his stage name (Joe Bari) and asked me what my real name was.  I told him, ‘My name is Anthony Dominick Benedetto’ and he said, ‘We’ll call you Tony Bennett.’  With a newly Americanized name, the start of a wonderful career and a glorious adventure began and has flourished for over 60 years.

“My ambition is to actually sound better as I get older. It’s all about meaning it more, giving it more depth,” Bennett says. His “Duets II” album debuted at No. 1, making him the only recording artist in history to achieve this at age 85!

Tony Bennett became a Kennedy Center Honoree in 2005, was named an NEA Jazz Master in January of 2006, a Citizen of the World award from the United Nations and aBillboard Magazine Century Award in honor of his outstanding contributions to music. Many fans are not aware that Tony Bennett is a dedicated painter whose interest in art began as a child.  He continues to paint every day, even as he tours internationally.  He has exhibited his work in galleries around the world.  The United Nations has commissioned him for two paintings, including one for their 50th anniversary.

Tony Bennett appears at the Palladium with very special guest Antonia Bennett.  Visit the Center for the Performing Arts Website for ticket information.