By now, you’ve undoubtedly heard that Birdman is a story about a former Hollywood actor trying to make a comeback twenty years after he starred in some blockbuster movies about a superhero called Birdman.  You probably also know that 1980’s comedic actor Michael Keaton plays Birdman, in a role that mirrors his own career.  Remember, Keaton was the original Batman over twenty years ago.  You’ve probably also heard Oscar buzz about Keaton’s excellent chances of snagging a Best Actor nomination for his performance.  And, he should.  This ranks with 1988’s “Clean And Sober” as the best acting he’s ever done on screen. 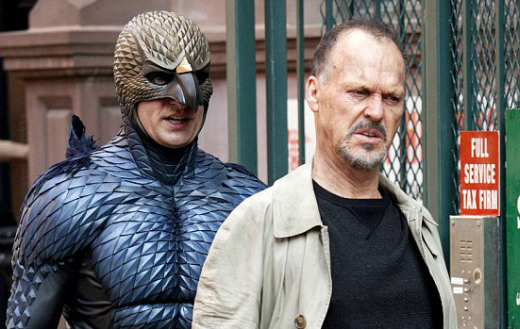 I liked Michael Keaton as Birdman, and I especially liked that this picture gives us an inside look at the world of live theatre.  Keaton’s character, Riggan Thompson, attempts to revive his career by writing, directing, and starring in a stage adaptation of a Raymond Carver short story.  Naomi Watts is confident yet vulnerable as the first-time actress playing the female lead.  Zach Galifianakis is nervous and funny as Thompson’s attorney and best friend.  Emma Stone turns in her best performance yet, as Thompson’s gopher and recovering-addict daughter, Sam.  And I especially liked Edward Norton as Mike Shiner, the consummate professional actor brought in at the last minute to play a vital role.  Norton’s character is one of those guys who’s great at what he does, and knows it.  But he can also be a real jerk.  Anyone who’s had any experience in the theatre world knows this guy.

My biggest problem with Birdman is the same problem I had thirty years ago with the Paul Newman vehicle, “The Verdict.”  Director Alejandro Inarritu’s original screenplay calls for certain obstacles to be placed in the way of Thompson’s success.  This is common to the plots of most films.  But in “Birdman,” the obstacles pile up faster than I could keep track of them.  First, we learn Thompson’s goal is to revive his long-dead Hollywood career by starring in an original play – a tall order indeed.  Then we learn he’s taken out a second mortgage on his house – the house he originally bought for his daughter.  Then Shiner practically sabotages the play during the endless parade of live preview performances.  Obviously, all are concerned that he’ll pull some stupid stunt on opening night.  To all this, the script adds the vile-penned New York Times theatre critic, an overly unpleasant woman played by Lindsay Duncan, who just so happens to hate everything about Hollywood – particularly screen actors who attempt to adapt their craft to the live stage.  Hmmm…  With all these cards stacked against him, do you think the play will be a hit or not?

And there’s the rub.  Too much is riding on the success of the play.  If Inarritu’s script calls for a triumphant ending, Thompson’s success seems unbelievable.  However, if the script calls for the play to be a disaster, the ending is more realistic, yet we’re disappointed.

Furthermore, as a viewer of Birdman, I felt a little betrayed by the screenplay.  As I mentioned earlier, each time an on-stage disaster occurs in front of an audience, we learn that this was just another preview – a “test” performance in front of those who, for financial reasons, want to see a performance that might not quite be ready for opening night.  While this is a common aspect of New York theatre, I don’t think many Birdman audience members will quite understand.  The effect is that we’re left thinking the play tanked on opening night, only to learn what we just saw was yet another preview performance.

I also want to comment on an annoying cinematic technique that plays throughout this entire film.  Inarritu’s camera seems to follow the actors, particularly Michael Keaton, in one long tracking shot.  In reality, it isn’t filmed in just one shot, but it seems that way.  Much as with the opening sequence of Robert Altman’s “The Player,” I don’t understand why Birdman was filmed this way.  Other than the fact that the Birdman superhero character flew, there seems to be no artistic reason behind this cinematic decision.  Don’t get me wrong, I love when certain visual techniques are used to help us understand the material.  Stanley Kubrick was a master of this aspect of filmmaking.  But here, I found the long tracking shot to be nothing more than “art for art’s sake.”