A guy comes home unexpectedly in the middle of the day and finds his wife in bed with his neighbor, He says “Murray, I have to! But, you?” 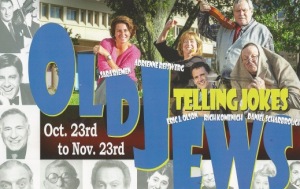 Old Jews Telling Jokes is an off-broadway comedy hit that pays tribute to and helps to reinvent classic jokes of the past and present.  So, you think you have heard them all?  Not like this!  If you have ever had a mother, a wife, visited a doctor or walked into a bar with a priest, rabbi and a traveling salesman – Old Jews Telling Jokes will make you laugh until you plotz!

Note: The performance on Saturday, November 1 will be presented at the Arthur M. Glick JCC as part of the Ann Katz Festibal of Books and Arts.  The event is a fundraiser fcelebrating the JCC’s 100th anniversary, will all proceeds going to the Indianapolis Jewish Community Center..  For more information on this special engagement or to purchase tickets, visit the JCC Website.