Under the direction of Pavel Kogan, the Moscow State Symphony Orchestra has been recognized for its artistic excellence and as one of the foremost interpreters of the classic Russian composers. Violin virtuoso Nadja Salerno-Sonnenberg performs Tchaikovsky’s beloved romantic and passionate Violin Concerto. 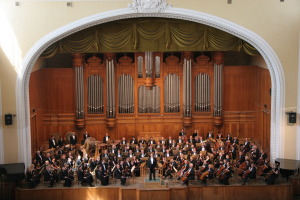 Ms. Salerno-Sonnenberg’s professional career began in 1981 when she won the Walter W. Naumburg International Violin Competition. In 1983 she was recognized with an Avery Fisher Career Grant, and in 1988 was Ovations Debut Recording Artist of the Year. In 1999, Nadja was honored with the prestigious Avery Fisher Prize, awarded to instrumentalists who have demonstrated “outstanding achievement and excellence in music.”

About the Moscow State Symphony Orchestra

Founded in 1943 by the Kremlin, The Moscow State Symphony Orchestra is one of the five oldest concert orchestras in Russia. Presently, The Moscow State Symphony Orchestra is renowned around the globe under the leadership of Pavel Kogan.  Maestro Kogan became Music Director and Chief Conductor in 1989 and has since enriched the orchestra’s repertoire by adding many European and American works.

A landmark of the MSSO has been to present the complete symphonic works of some of the greatest composers including Brahms, Beethoven, Schubert, Schumann, R. Strauss, Mendelssohn, Mahler, Bruckner, Sibelius, Dvorak, Tchaikovsky, Glazunov, Rachmaninov, Prokofiev, Shostakovich, Scriabin, Berlioz, Debussy and Ravel. These wide-ranging programs balance great orchestral, operatic, and choral classics with the equally significant music of the 21st century and many forgotten pieces.

The MSSO play some 100 concerts annually including a series in the Great Hall of the Moscow Conservatory and in the Tchaikovsky Concert Hall, the Great Hall of the Saint-Petersburg D.D. Shostakovich Philharmonic Society and on stages throughout Russia, as well as on tours abroad. Their touring schedule has brought the MSSO to 59 countries including the United States, Great Britain, Japan, Spain, Austria, Italy, Germany, France, South Korea, Australia, China and Switzerland.