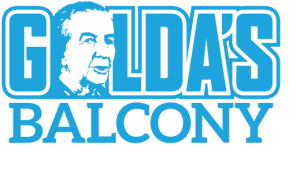 Revered for her idealism, power and strength, this look at Golda Meir is an engaging look at the legendary world leader.  Goldas Balcony It is an intimate and compelling one-woman show that takes the audience into the heart and mind of one of the 20th Century’s great heads-of-state.

The show follows the arc of the life of the fourth Israeli Prime Minister from that of a Russian immigrant to an American schools teacher to her ultimate transformation into a renown world leader.  Much of its focus of the play is in the period surrounding the 1973  Yom Kippur war when Israel was attacked by Egypt and Syria.

Student matinees on Tuesdays and Wednesday at 10:30 am

Thursday and Friday Performances at 7pm
1st and 2nd Saturdays at 7pm – Saturday , November 8 at 5pm
Sundays at 2pm