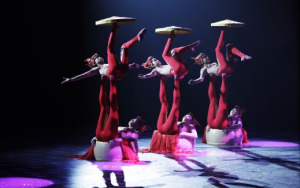 The National Acrobats of the Peoples Republic of China thrill audiences with their agility and flexibility as they perform daring feats with common objects. You will be astounded and thrilled with their unique combination of acrobatic and circus prowess during their October 25 performance in the Palladium at the Center for the Performing Arts, Carmel, Indiana.

“The night was filled with spectacular stunts … Contortionists bent and flexed their bodies in ways that seemed to defy the human anatomy, acrobats made leaps and tumbles that made one question the alws of physics, and many of the acrobats laughed in the face of gravity.” —The Anchor-Kyle Grant

About the National Acrobats of China

Direct from Beijing, this ensemble has been one of the most acclaimed acrobatic troupes in China. Over several generations, the Company has developed many unique acrobatic acts. Founded in 1951, this dazzling company has mesmerized audiences of all ages worldwide with stunning displays of the Chinese martial arts, illusion and acrobatics and, all set to traditional music. From cycling stunts to high-flying acrobatics to extraordinary feats of balance, this is one of the most influential large acrobatic troupes on the planet.

Part of the Center for the Performing Arts CNO Financial Group Family Series, The National Acrobats of the People’s Republic of China performance promises fun for the entire family.

National Acrobats of the Peoples Republic of China Cirque Peking
Saturday, October 25, 2014 at the Palladium. 8pm