Love Is Strange has to be one of the worst titles ever for a motion picture. It’s so bad it could be the title of about half the films ever released. But don’t be fooled.  Love Is Strange is a low-key but powerful picture about two gay senior citizens forced to move from their New York apartment when one loses his job. Each moves in with family members or friends while they search for a new place to live, creating awkward situations and the underlying feeling that each is “in the way” – or an intrusion into the lives of others. Love Is Strange is really more about the aged than it is about gay men. 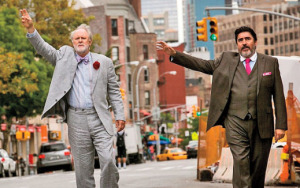 The two long-time partners are played by the brilliant and diverse character actor John Lithgow as Ben, a painter, and British actor Alfred Molina as George, a music teacher. While George bunks with two gay New York City policemen, Ben moves in with his nephew Elliot. The problem? Elliot is hardly ever home. Instead, most of Ben’s interaction is with Elliot’s wife Kate, a successful writer played by the always-charming Marisa Tomei. As you might expect, Kate needs her apartment to be very quiet during the day. Therefore, Ben’s mere presence is a problem for her. Elliot and Kate’s son, Joey, must bunk with Ben. At first, Joey seems to enjoy having his older and wiser uncle so close and so available. But their relationship soon sours. It is this relationship, between great uncle and great nephew, which is the most interesting of the entire picture.

George’s life doesn’t garner nearly as much play as Ben’s, nor is his situation as interesting. The gay policemen friends host many loud late-night parties, resulting in a lack of sleep for poor George.

I was left to wonder about the fact that the two central characters are gay men. I thought, “Couldn’t they have just as easily been a married, heterosexual couple?” And the answer is “No.” Imagine if they were man and woman. Wouldn’t their friends and families have done everything possible to keep them together? No one would think about separating them. And herein lays a subtle but major facet of Director Ira Sachs’ script. Despite all outward efforts by the other characters to present Ben and George and their relationship as “acceptable” in this day and age, there is still that stigma that a gay relationship is somehow inferior to a heterosexual one – that the two longtime partners can be split up for an indefinite period of time because they are gay. Again, no mention is ever made of this, but it’s something to consider as you wonder why the two leads had to both be of the same gender.

Unlike so many of today’s films, the third act is the most powerful. It begins when Ben falls and dislocates his shoulder, and it concludes with the two most meaningful scenes in the picture. I always enjoy when a script doesn’t tie up all the loose ends – in other words, when the screenwriter knows we’re smart enough to put some thought into how we might imagine things turn out. In “Love Is Strange,” the relationship between Uncle Ben and young Joey is drawn to a very satisfying conclusion, which I found to be a necessity of the script. There is subtle brilliance in the way Sachs ends Love Is Strange.

As a side note, Darren Burrows plays Joey’s mostly-absent father, and before you ask where you’ve seen him before, think “Northern Exposure,” that great, quirky, television series from twenty years ago. There are actually two actors from “Northern Exposure” in Love Is Strange, but Burrows is likely the only one you’ll notice. I’m warning you so you don’t spend a lot of time agonizing over where you’ve seen this guy before. Concentrate on the story instead. It’s one you’ll remember for a while.

-As of this writing, Blu-ray and DVD release date has not been announced.