By now, you’ve undoubtedly heard that Richard Linklater’s new film, “Boyhood,” was shot with the same cast, intermittently, over a period of twelve years.  And you’re probably wondering exactly how this “gimmick” plays out on the big screen.  I hope I can answer that question.

The gimmick, if you will, works very smoothly.  It’s certainly not a distraction.  Truth be known, I wouldn’t have minded if the film were shot over a limited duration, using child actors to portray the children, and then teenage actors to play them when they are older.  But I’ll have to say, Linklater’s choice helped with the continuity and flow, as well as the realism.  For example, no titles are used to declare a new scene takes place in a subsequent year.  Instead, the passage of time is relayed via hairstyles, music, and, in a very creative twist, the type of gaming and communication devices used by the kids.

As far as the film itself is concerned, “Boyhood” is nothing short of the best film so far in 2014.  Even though it’s only August, this picture is an instant Oscar contender.  The outstanding original screenplay follows a family’s development from 2002 to present, as it is seen through the eyes of young Mason Jr., effectively played by newcomer Ellar Coltrane, who deserves a Best Actor nomination.  Linklater’s own daughter, Lorelei, played Mason’s sister, Samantha.  Their parents are played by Patricia Arquette and Ethan Hawke. 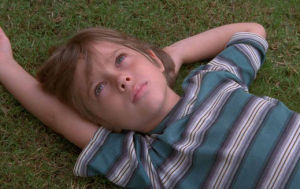 Olivia (Arquette) is a divorcee trying to work and earn her degree, while raising two young children.  We soon learn she has a habit of making poor choices for husbands.  By the end of “Boyhood,” we’ve experienced two more of her marriages – again, through the eyes of the children.  While we certainly sympathize with Olivia’s ongoing plight, we feel for the kids, who must accept new step-siblings, and change schools, and make new friends.
Meanwhile, Mason Sr. (Hawke) is basically a good-for-nothing drifter, still trying to make it in the music business, who occasionally visits his children and showers them with gifts.  When we first meet the parents, we have an inkling how these family dynamics are going to play out.  But this assumption proves incorrect.  As Mason Sr. begins to assume more responsibility in his life, Olivia becomes more detached and bitter.  It’s a shocking reversal of the roles Hollywood typically stereotypes.

And therein lay the brilliance of the script.  Nothing turns out the way we expect it to.  At one point late in the film, when Samantha is a college freshman and Mason Jr. is a high school senior, I thought surely the siblings’ relationship would solidify, and they’d become best friends.  In other words, they’d had quite a few rough patches growing up, but they’d always have each other.  Again, I was wrong.  While they remain close at the end, Linklater wisely avoids that sugarcoated ending.  He also avoids any groundbreaking revelations with the parents.  A typical Hollywood script would have found a way to tie all the loose ends in a nice little knot, so we leave the theatre feeling good about humanity.  Instead, “Boyhood” presents real life.

It’s not often I sit through a nearly three-hour motion picture and not want it to end.  Peter Bogdonavich’s 1971 classic, “The Last Picture Show,” was such a movie.  So is “Boyhood.”  In fact, I was so thrilled the way Linklater ended this film that I hope it continues.  I want to know what happens to Mason and Samantha during their college years and beyond – just as I wanted to know what happened to the characters of “The Last Picture Show.”
Will Samantha and Mason Jr. make good choices in their marriages?  Will they become productive citizens?  What happens to their parents?  Will Olivia finally find her purpose in life?  Will Mason Sr. ever grow up?  Where will the arc of this story take us next?  I hope Linklater continues periodically filming new episodes with this same cast and characters.  Then in twelve years, I hope he shows me more.  I’m willing to wait.  “Boyhood” is that good!