Other than any Inspector Clouseau movie starring Peter Sellers and the occasional James Bond flick, I hate sequels.  People say sequels are “never as good as the originals.”  What they mean is sequels are never as original as the originals.  Why?  Because we’ve seen it before.  Every time Sly Stallone issues forth a new Rocky sequel, I have to remind myself what a good movie the first “Rocky” was.  The ridiculous sequels have made the freshness of the 1976 film fade from my memory.

But then along came the two “Toy Story” sequels.  I don’t want to say they were better than the original, but they were certainly “as good.”  I was pleasantly surprised by the quality of both “Toy Story” follow-ups.  Pixar proved my theory wrong.  Some sequels (albeit very few) can possibly measure up to the original material.

And now it’s happened again!  Robert Rodriguez and Frank Miller have followed up their 2005 flick “Sin City” with a long-awaited sequel which is so much fun to watch it actually strengthened my memory of the original.  For those not familiar with this franchise (nor the Frank Miller comic book series upon which the films are based), “Sin City” is a dark, boozy, rat-infested stinkhole of a city, crawling with every chain-smoking, double-crossing lowlife imaginable.  It’s never daytime in “Sin City” – literally or figuratively.  And every hooker, stripper, crook, cop, politician, and bad guy is looking for one more score. 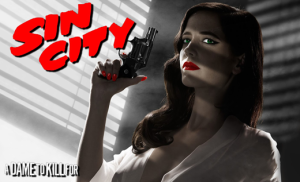 As in the original film, Mickey Rourke’s square-jawed vigilante character, Marv, is my favorite.  He’s a guy who lives for killing others, yet he’s the closest thing to a “good guy” you’ll see in this town.  At the outset of “Sin City: A Dame To Kill For,” Marv tortures and kills a band of frat boys for setting a homeless man on fire and then laughing at him.  Marv reasons the world is simply better off without folks like these.  Throughout this picture, he assists those trying to bring about justice, such as it is in Sin City.

The other plot strands involve newcomer Josh Brolin as a recovering alcoholic private eye who still has a soft spot for his old flame Ava Lord, played by Eva Green.  Ava, the “Dame To Kill For” of the title, is so seductive she lures men into her tragic and dangerous life, practically at first sight – even gumshoe cop Mort, played by Christopher Meloni.  Her personal assistant Manute (Dennis Haysbert) is one tough dude.  Prying Ava from Manute requires the talents of the girls from the Old Town neighborhood – Gail (Rosario Dawson), her sword-wielding assistant Miho (Jamie Chung) – and (as you might expect) Mickey Rourke’s Marv.

My favorite story-line involves young gambler Johnny – an over-confident, perfectly-cast, Joseph Gordon Levitt, out to defeat the evil Senator Roarke (brilliantly played by veteran character actor Powers Boothe) at poker.  Here again, Johnny gets in over his head (Notice a theme?), but other characters are always available to help, including Christopher Lloyd as an old goofball doctor whose specialty is removing bullets (without anesthetic, of course), and a helpful diner waitress played by Lady GaGa.  (And didn’t you just know she’d show up amongst all this human refuse?)

My only complaint is that the ghost of the character Bruce Willis played in the original picture shows up to remind Nancy (an underutilized Jessica Alba) why she needs to kill Senator Roarke.  I would have preferred Rodriguez and Miller try a little harder for this installment to stand on its own.  After all, it’s been nine long years since the first “Sin City” – too long for plot intricacies to matter anymore.

As you can imagine, “Sin City: A Dame To Kill For” is extremely violent.  Blood spills everywhere, but the violence is so far over-the-top it doesn’t run the risk of seeming real.  Shot in glorious black & white, “Sin City” is as much a thrill ride as possible in the movies these days.  Rodriguez’ direction is like Quentin Tarantino on steroids.  Think “Django Unchained” crossed with a Bugs Bunny cartoon.

But this material practically begs to move forward quickly.  I love the fast pacing.  I love the seedy, scheming, hopeless characters.  I love almost everything about this movie.  And I certainly hope I don’t have to wait nine more years for the third installment of this fascinating franchise.