The Grand Budapest Hotel, located in the fictional former republic of Zubrowka, high in the Swiss Alps, is one of those old-fashioned ornate homages to an earlier time – a time when the wealthy congregated to lavish outposts to relish the best customer service money could buy.  It reminds me somewhat of the grand domed hotel in French Lick.  Only with a European stuffiness we Hoosiers could only dream of.  Its heyday was from the turn of the century through the Roaring Twenties.  Wes Anderson’s motion picture, “The Grand Budapest Hotel” takes place in 1932 – at the tail end of the hotel’s reign as one of the most sought-after resorts for the upper-crust.

Overseeing the operations of the hotel and the needs of its many guests is Gustave H., a concierge extraordinaire, played to the hilt by British actor Ralph Fiennes.  The story is told from the point of view of Gustave’s protégé, Zero, played by newcomer Tony Revolori.  Gustave is so particular to fine details that he knows all the likes and dislikes of his clientele.  His regular guests don’t even need to ask for anything, as Gustave is always one step ahead of their desires.  Gustave also manages the Grand Budapest staff, telling them stories and reciting poetry to them, even as they eat their dinner. 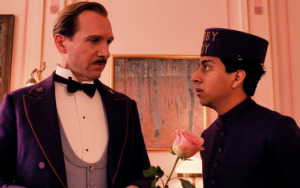 But just as these establishing scenes begin to wear thin, Gustave becomes the owner of a priceless painting, willed to him by one of his regular guests.  This angers the deceased woman’s ungrateful family, causing her son Dmitri (Adrian Brody) to frame Gustave for her murder.  Gustave is then arrested and sent to prison, where he joins a small band of hardened criminals to hatch an escape, aided on the outside by Zero.  Then the search is on to find Gustave an alibi.

All throughout these ordeals, Gustave never drops his stiff upper lip.  Fiennes, who has made a career out of playing pure evil (Remember his Secret Service officer in “Schindler’s List?”), plays Gustave to the hilt.  Even during times of great duress, Gustave maintains a certain cool British charm, as he continues to spout wickedly funny lines of poetry to those least likely to appreciate it.  He brings a touch of class to every group and every acquaintance.  His interaction with Ludwig, a lifetime criminal played by Harvey Keitel, is priceless.

Upon its conclusion, I was left wondering what on earth I was supposed to get out of “The Grand Budapest Hotel.”  It’s funny, yes, but what did it all mean?  Later, I realized this film is simply a tribute to a time when impeccable customer service was the expectation.  Think of today’s motels.  Or department stores.  Or restaurants.  When was the last time an employee bent over backwards to help you fulfill your needs?  Back in the day, even in America, service employees took such pride in their work that reputations were earned.  Gustave H. represents this link to the past.

While Monty Python has spent the past four decades skewering the snobbish upper-crust of British society, director Wes Anderson seems to be honoring it.  Even when all hope appears lost, Gustave H. always does his best.  To him, it’s a matter of pride.  In this sense, Gustave H. reminds me of a broadly comical version of Alec Guinness’ Col. Nicholson in “The Bridge On The River Kwai,” who spent an entire movie constructing the best bridge he could possibly build, even though he and his men were prisoners of war.  It’s this pride in his work that kept him sane, and the same can be said of Gustave.

“The Grand Budapest Hotel” likely won’t win any awards come next year’s awards season, but it’s certainly an enjoyable romp, and one that I suspect may be the surprise hit of the spring.