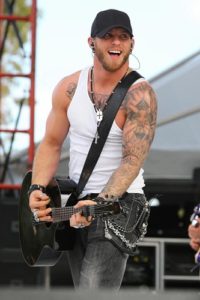 Brantley Gilbert recently announced his 2019 Not Like Us Tour and will be making a stop at Ruoff Home Mortgage Music Center (a nominee for ACM Large Capacity Venue of the Year) located in Noblesville, Indiana on Saturday, September 21, 2019, as part of the Coors Light Concert Series, and features special guests Michael Ray and Lindsay Ell.

When Brantley Gilbert gets his tour on, he goes out of his way to make sure it’s unlike anything he’s ever done. Having spent last fall on the road with Kid Rock, he wanted to take his own hardcore post-country to some new places on his 2019 Not Like Us Tour – bringing some different flavors to the ever faithful BG Nation.

Joining the CMA Song of the Year nominee for Not Like Us will be traditional-leaning, country-pop superstar-in-the-making Michael Ray, known for “Get To You,” “One That Got Away,” “Kiss You In The Morning,” and “Think A Little Less,” and the fiery, genre-blurring guitarist/vocalist Lindsay Ell, who joins Gilbert on his first male/female duet “What Happens In A Small Town,” as well as her own “Criminal” and “Shut Me Up.”

With back-to-back platinum albums, as well as the 2014 American Music Award for Favorite Country Album, for Just As I Am, Brantley Gilbert established a raw, hardcore fusion of rock/country/hip hop and gospel that consolidated the fervent BG Nation with six #1s as an artist and songwriter — “Country Must Be Country Wide,” “Bottoms Up,” “You Don’t Know Her Like I Do,” “One Hell of an Amen,” “My Kind of Party,” and the CMA Song of the Year nominee “Dirt Road Anthem.” Hailed by Entertainment Weekly for “swaggering guitars, catchy hooks, and a DGAF attitude,” NPR for “performances (that) are instantly recognizable, often confrontational, and that pack a punch,” and American Songwriter who proclaims, “Gilbert never fails to deliver,” the South Georgia superstar is his own very specific kind of country.

Tickets for Brantley Gilbert, promoted by Live Nation, are on sale at LiveNation.com.